All About The *NEW* Academy Museum of Motion Pictures 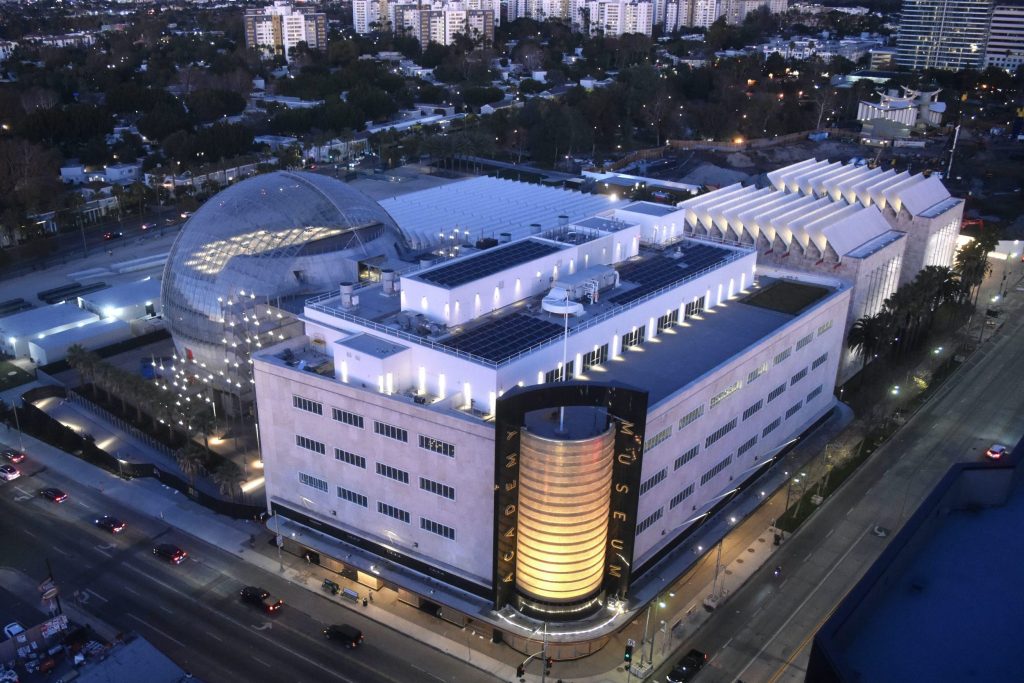 Finally, after much delay, The Academy Museum of Motion Pictures is open for business! After nearly 500 million dollars in expense, this museum boasts being the first and only of its kind in America, and the largest museum ever with a focus on film and its impact on society. The city of Los Angeles has stood as the home to the film industry for over a decade, so its only right that the Academy Museum would lay its roots right here in the heart of LA, right off the miracle mile.

The History of the Academy Museum

It was way back in 2012 when the Academy announced the construction of this building after acquiring the old LACMA art deco building and hiring architects Zoltan Pali and Renzo Piano, but the Academy’s original plans to open the museum in 2014 were wholly scrapped when Zoltan Pali left and some funding was pulled as the budget grew. They got things back together and projected a 2019 opening, but just as the crew entered their final stretch of production the museum’s director, Kerry Brougher, unexpectedly quit the project altogether.

A few months after Kerry Brougher’s departure from the project, Bill Kramer was brought in and everything seemed ok. The new opening date in 2020 would surely go through without a hitch, right? RIGHT? Unfortunately, the COVID-19 Pandemic was enough to stop even the Academy of Motion Pictures, and the project was pushed back yet again to the Dismay of the new bossman, Bill Kramer. Things got pushed back indefinitely while the world sorted out its new dilemma, until finally, on September 30th, 2021, the Academy Museum of Motion Pictures finally opened its doors to the public. 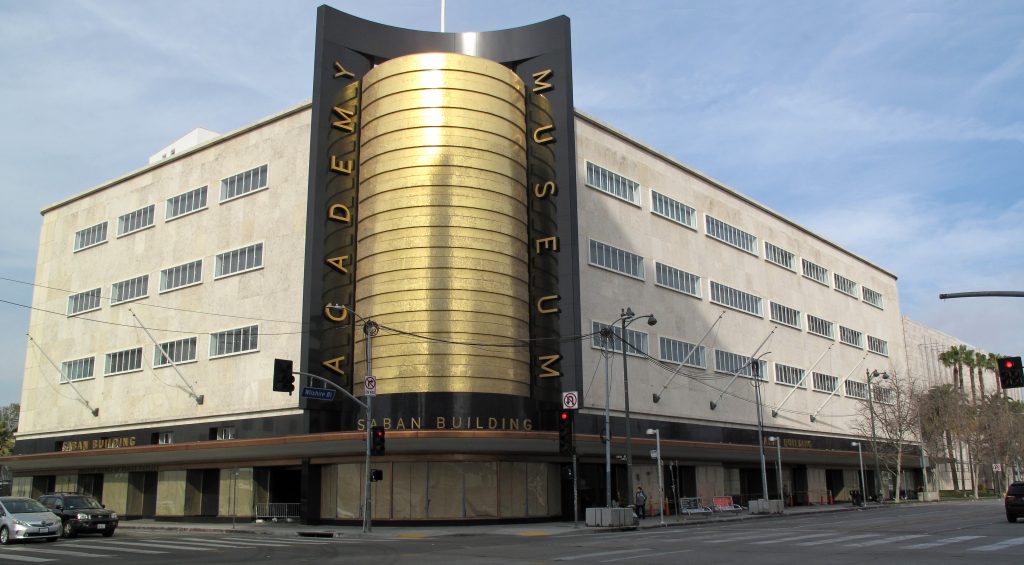 “The pandemic required us to move our opening twice because museums were not open in Los Angeles. That only allowed for more time to build these beautiful exhibitions in a COVID-safe way.” – David Kramer

The Academy Museum of Motion Pictures features many amazing exhibits and physical pieces of Hollywood history. The museum sits in the Museum District of Miracle Mile right off Wilshire Blvd. Alongside LACMA, the Petersen Automotive Museum, The La Brea Tar Pits, The Craft and Folk Art Museum, and the construction of the Korean American Museum scheduled for opening in 2022, The Academy Museum sits proudly among its peers.

The Saban Building where the Academy’s new museum is housed was originally owned by LACMA, who named the building after Chryl and Haim Saban after a donation of $50 million. Even further back, the building was a May Company Department Store built in 1939.

Inside the Academy Museum of Motion Pictures 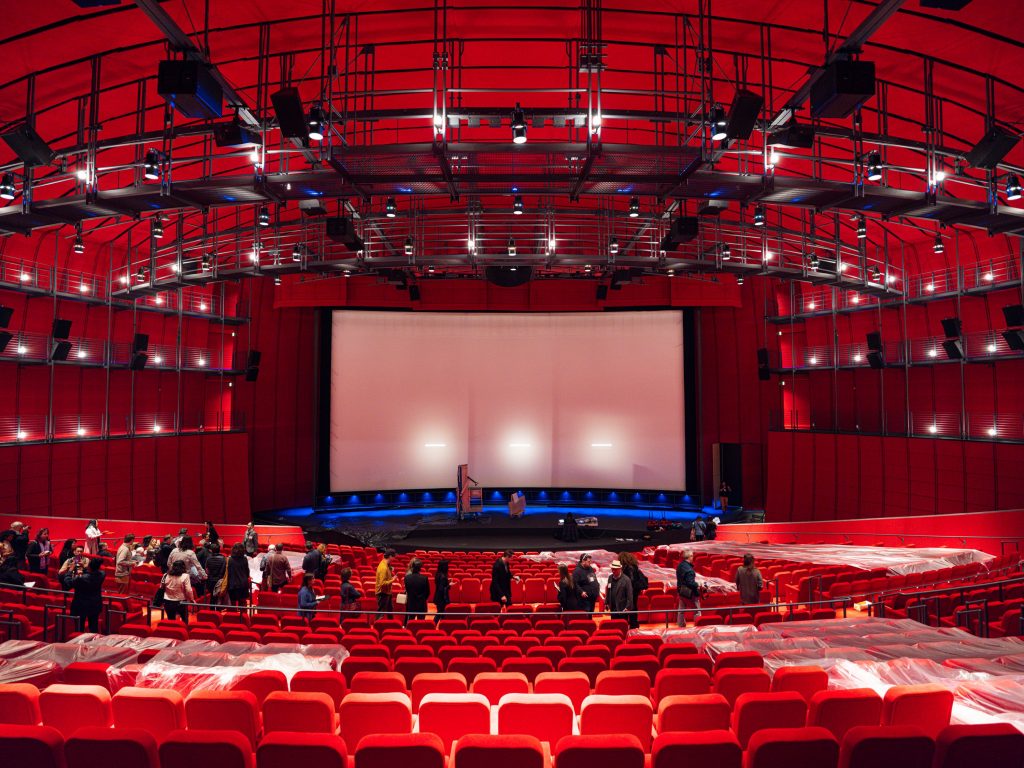 The David Geffen Theater can seat as many as 1,000 guests.

The Academy Museum of Motion Pictures features many amazing exhibits and physical pieces of Hollywood history, but perhaps the best thing about this Museum is how often you get to watch actual film on actual screens. The most impressive of said screens sits inside an enormous death-star-esque building that hangs off the back of the Saban building, clearly visible from the Tar Pits walking grounds. The 1,000 seat monster theater for film events, live performances, movie premieres and pretty much any sort of viewing has been dubbed the David Geffen Theater, and we’re all very excited to see how this new theater plays a role in Hollywood’s upcoming premieres and events. It’s equipped to play nitrate, 35mm, 70mm, and laser projection with Dolby Vision. Beyond that, the Dolby Atmos surround sound system installed is one of the most impressive sound systems out there, with the architectural acoustics to match. You could fit a 60-person orchestra inside for performances, there are also catwalks that could be utilized for varying performances and showings.

While the David Geffen theater is the largest, the most regularly-used theater of the museum is located inside the Saban Building itself. The Ted Mann theater is a 288-seat theater that has regular screenings and daily events for museum-goers to enjoy. The theater can present film in 16mm, 35mm, 70mm, as well as top-tier laser projection. You’ll be able to find live performances, lectures, symposia, and many different community and children’s events throughout the year. 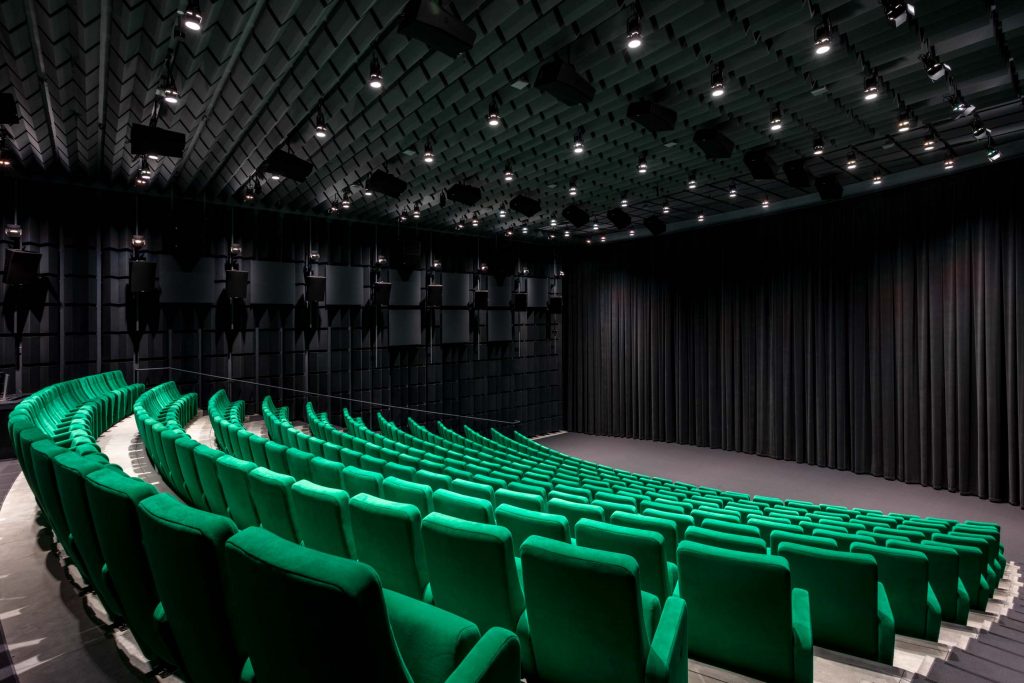 The Ted Mann Theater hosts daily events and screenings to the public. 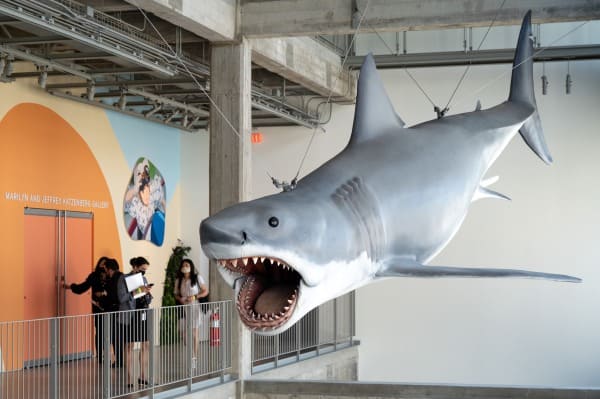 The Shark from Jaws hangs from the ceiling, nicknamed Bruce. 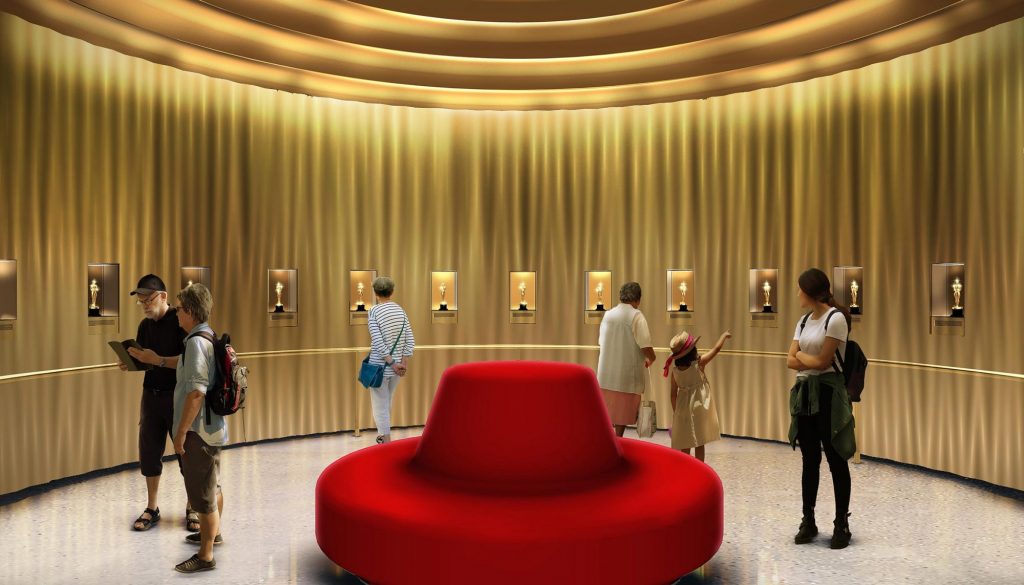 The Oscar Experience Exhibit is an ongoing display that allows you to get a look at actual Oscar Awards up close and personal, and you can even get an idea of what it would be like to receive an Oscar award yourself via an interactive visual experience. 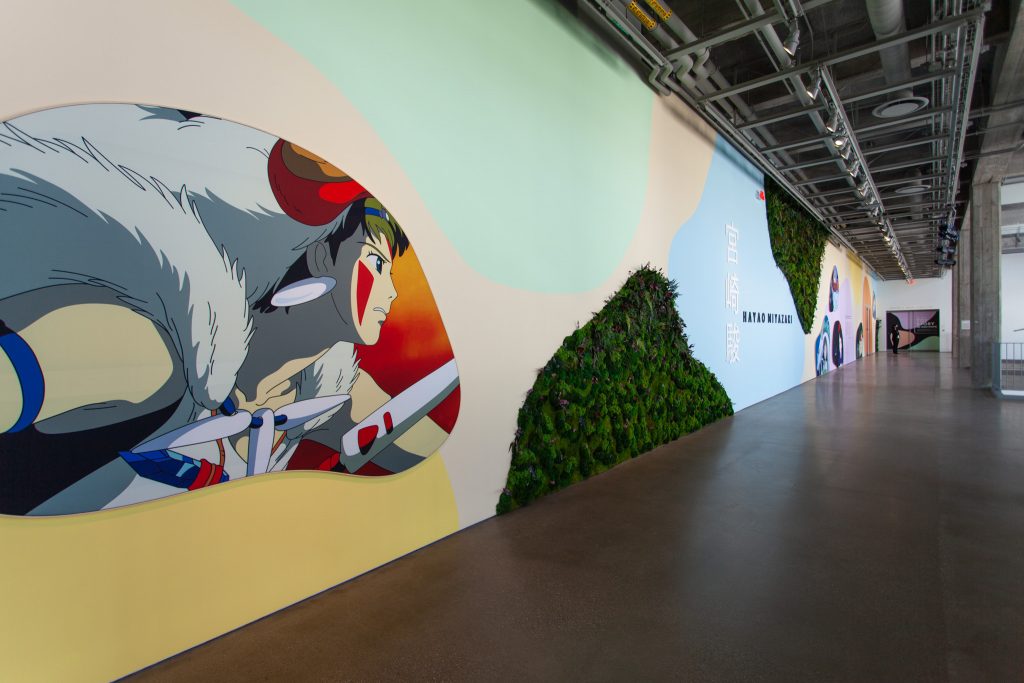 The Academy Museum will be celebrating famed Japanese animator, Hayao Miyazaki, who makes up 1/2 of Studio Ghibli, by screening his entire library of works in their theaters as one of their very first exhibits. This exhibit will run through June 5th, 2022 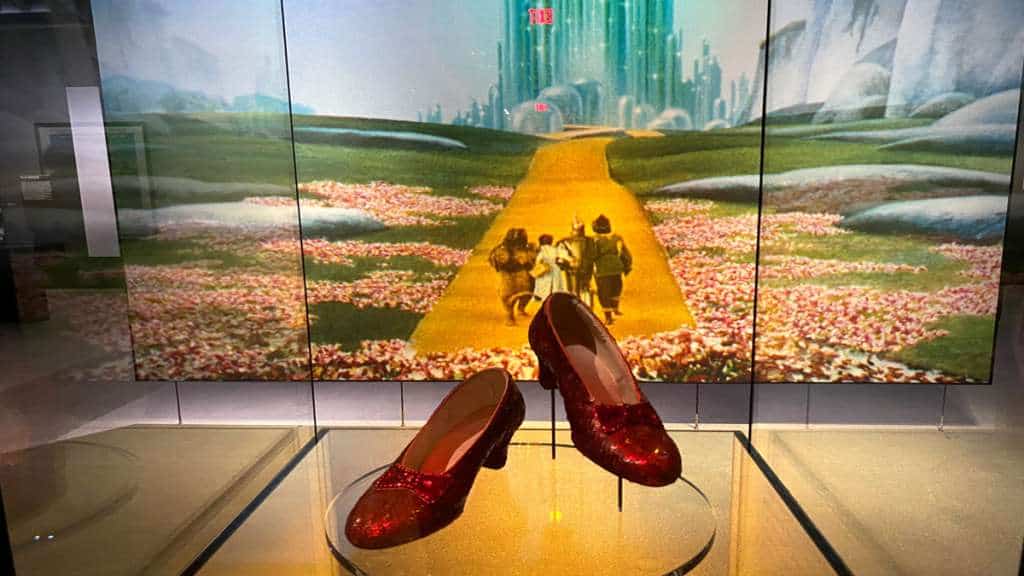 Get a look at Dorothy’s red slippers from the Wizard of Oz, as well as some beautiful visuals from the original filming in 1939. 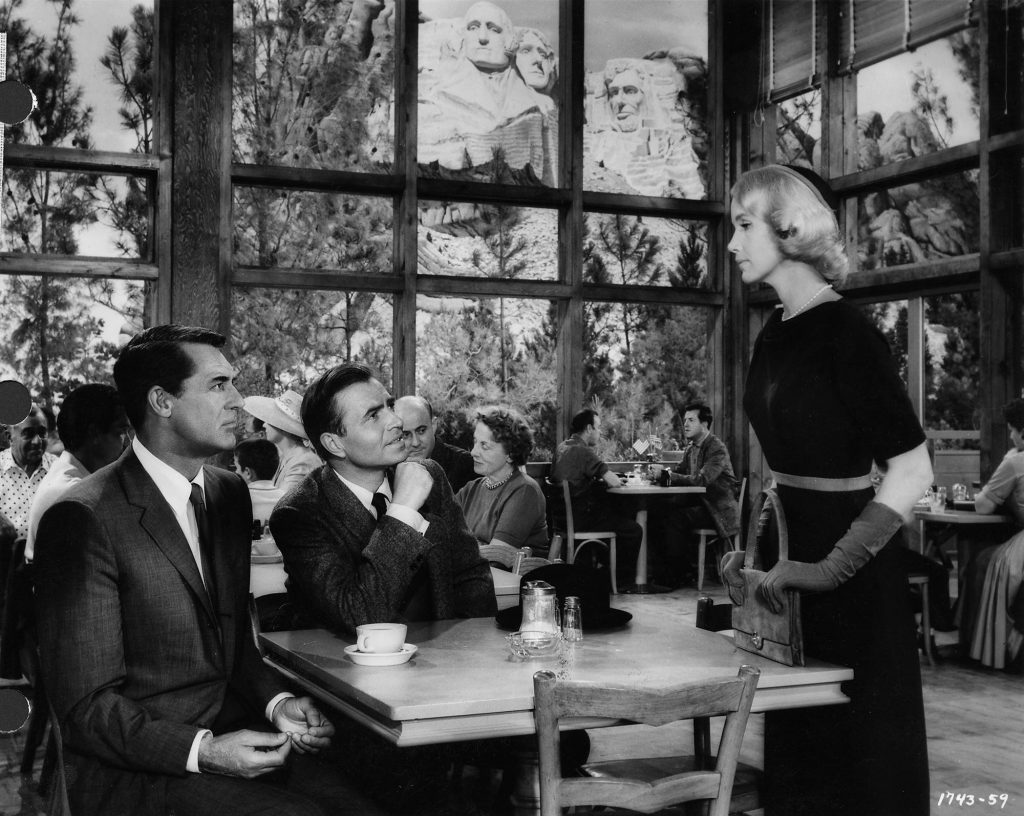 Discover the grand aesthetic and importance behind the backdrop, focusing on the famous Mount Rushmore backdrop from North by Northwest, produced and directed by Alfred Hitchcock and starring Cary Grant. 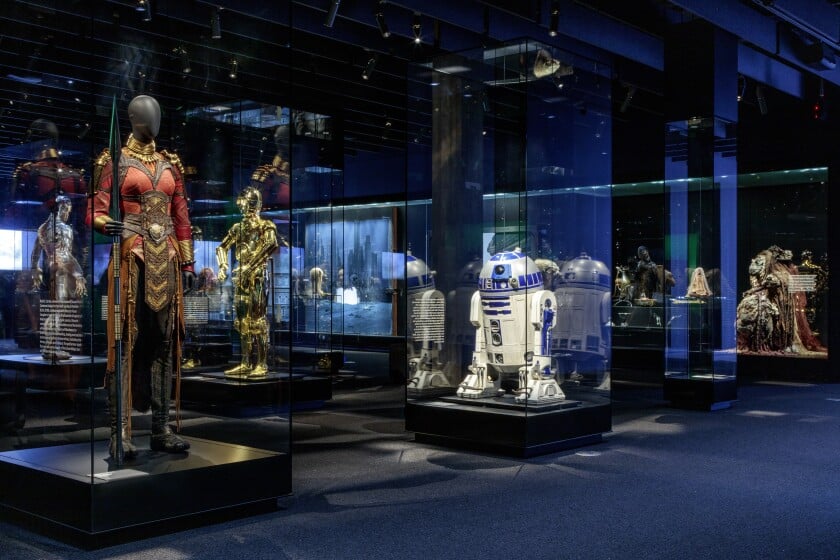 The Star Wars Exhibit houses the original R2D2 and C3P0 Robots, and much more throughout multiple floors of science fiction history.

Want to learn about the other museums nestled right alongside the Academy Museum of Motion Pictures in Los Angeles’ Famous Museum Row? Check out Surf City Tour’s Guide to Museum Row Below!