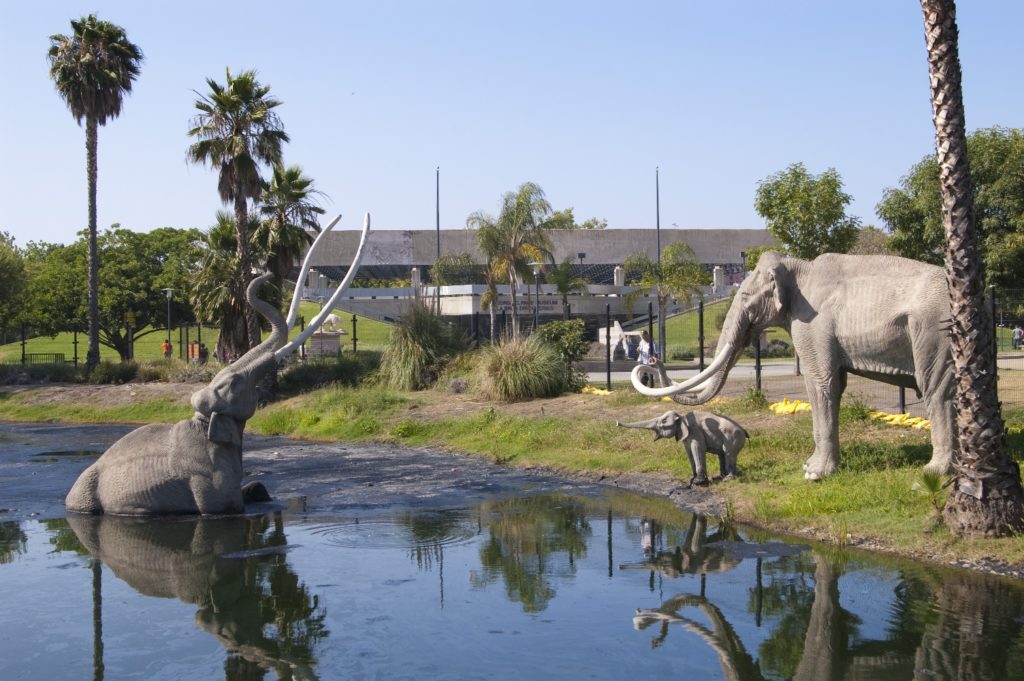 The La Brea Tar Pits sit right next to the Los Angeles County Museum of Art and are a must-visit for any fan of the fossil.

Large pits of bubbling, oozing tar aren’t exactly what you’d expect to find along the Miracle Mile in the center of the metropolis that is Los Angeles, but… Well, you will. The La Brea Tar Pits are a living, breathing excavation and research site designed to be as transparent and open to the public as possible. The Tar Pits boast a huge outdoor grounds that are great for a picnic or stroll, you can even bring your dog to walk the grounds with you. Additionally, the La Brea Tar Pits are stationed right next to LACMA, The Academy Museum of Motion Pictures, as well as the Petersen Automotive Museum, so keep reading and you just might be able to plan the perfect museum day in LA.

One of the first things you’ll see when entering the Tar Pits from Wilshire Boulevard is an enormous wooly mammoth statue taking its last breath, encased in the center of a pit of tar that spans about 30 feet from him in every direction. Shortly around and beyond this first stretch of tar you will see the pyramid-shaped George C. Page Museum, this is the museum proper within the La Brea Tar Pits grounds and is technically a part of the Natural History Museum. Still, without ever paying admission to the George C. Page museum you can experience a whole lot just by walking the grounds outside. The outdoor area is something like a really tiny central park, you can traverse through the whole thing in about 8 minutes and be back out in the busy LA city streets on the other side, but its filled with interesting statues of now-extinct animals and actual excavation sites that are actively being worked on. 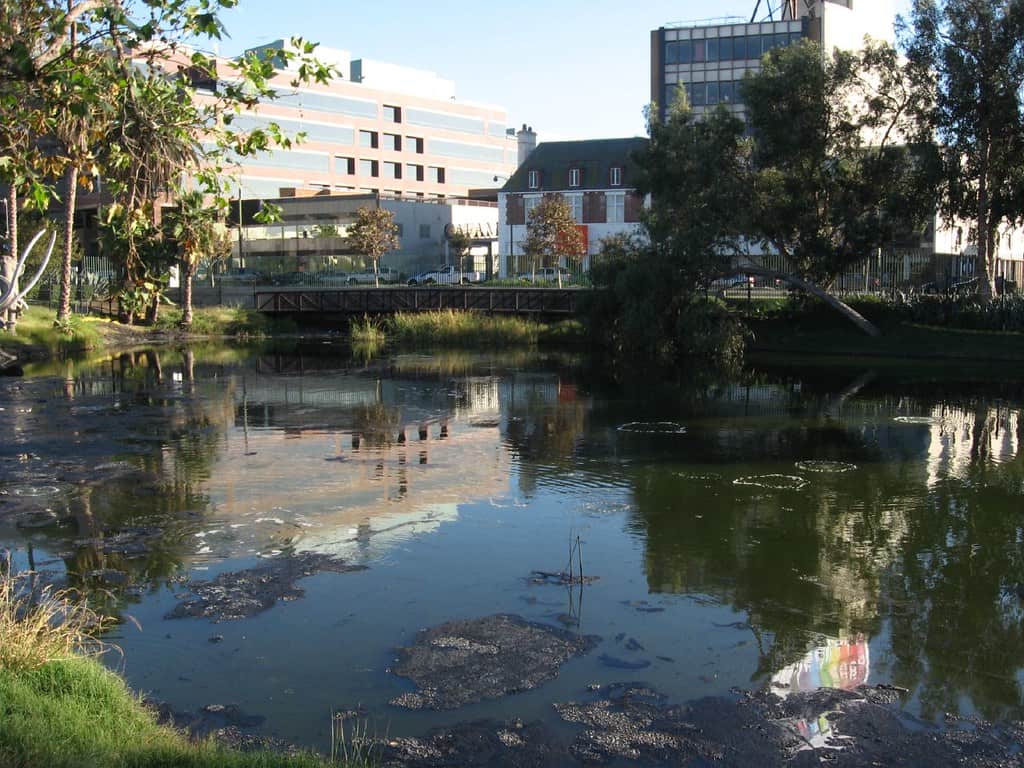 The History of the La Brea Tar Pits

The first written record of The La Brea Tar Pits was in 1769, but they were known long before that. In fact, the Chumash and Tongva tribes that lived in the Los Angeles area before it was colonized would use the tar from the pits to seal the cracks between the wood in their boats. The first expedition to come close to the tar pits was led by Gaspar de Portolá. They didn’t get to see the Tar Pits themselves because it was too far out of their way, but they still went ahead and named them Los Volcanes De Brea (brea means tar in spanish and you can probably figure out volcanes on your own) after learning about them from their local guides.

The land the tar pits sits on was originally a part of a Mexican land-grant. There were actually many instances of bones being found on the premesis that were simply discarded as nobody was aware that they were fossils, but rather thought to be simply dead animals from nearby ranches that had gotten stuck in the tar. It wasn’t until 1901 that W. W. Orcutt was credited with discovering that the tar contained prehistoric animal fossils and remains. Then, in 1913, the owner of the land granted exclusive excavation rights to the natural History Museum Los Angeles County for two years. About 750,000 fossils were extracted in those two years, and then in 1924 the same owner of the land, George Allan Hancock, agreed to donate 23 acres to Los Angeles in exchange for the preservation of the tar pits as a park, as well as the agreement to exhibit the fossils discovered to the public as a museum.

The George C. Page museum opened to the public in 1975, an offshoot of the Natural History Museum built right next to the tar pits. Within the museum you can find the history of the Tar pits themselves, as well as the most interesting and unique fossils and creatures found wtihin the tar. Adult tickets generally cost $14 for entry to the Page museum, and about an hour or two is generally going to be enough time to see most of the exhibits in this smaller museum.

The George C. Page museum is currently closed due to COVID, however the La Brea Tar Pits grounds are still open daily to the public and there are a lot of awesome things to see strolling through!

There are currently just two active excavation sites at the tar pits. Pit 91 is the main project still going, and you can see the work being done by visiting the Pit 91 viewing area that’s open to the public during the day. Project 23 was born in 2009 when the museum formally announced the discovery of Mammoths, Sabertooths, and more during the construction of a nearby parking garage for the museum. The construction was obviously halted, and Project 23 was born!

This is really a cool  place to visit with children or anyone excited by fossils, archaeology, paleontology, or science in general! The La Brea Tar Pits was on Time for Kids’ list of Worlds 50 coolest places in 2019. You can smell ’em from a few blocks away, so if you happen to be nearby and you catch a whiff, be sure to head down to the La Brea Tar Pits and take in all those sweet fumes of history & science.

Want to learn more about what’s going on currently? Here’s the Active Excavation Info straight from the source!

Planning a trip to The Tar Pits? Walking the grounds and checking out the outdoor tar exhibits are completely free, and the museum itself is very reasonably priced and an easy visit. Here are some useful links for those planning a trip below.

Our Guide to LACMA: The Los Angeles County Museum of Art

Learn About the Petersen Automotive Museum