The History Of The Original Farmer’s Market 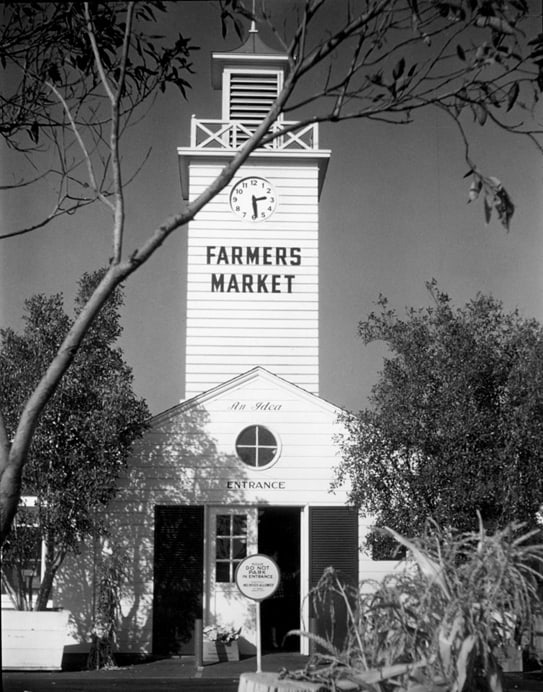 The Origins of The Original Farmer’s Market: From Milk to Oil

Arthur Fremont Gilmore originally moved to California from Illinois in the 1870s. He and another farmer established a dairy farm in what is now known as Compton. In 1880 the partners acquired a 256-acre plot of land from a bankrupt businessman by the name of James Thompson and established two farms. One of these farms sat on what is now the Farmer’s Market, and the other one located over what would now be The Grove mall. Within ten years Arthur purchased the entirety of the land and carried on with business as usual. 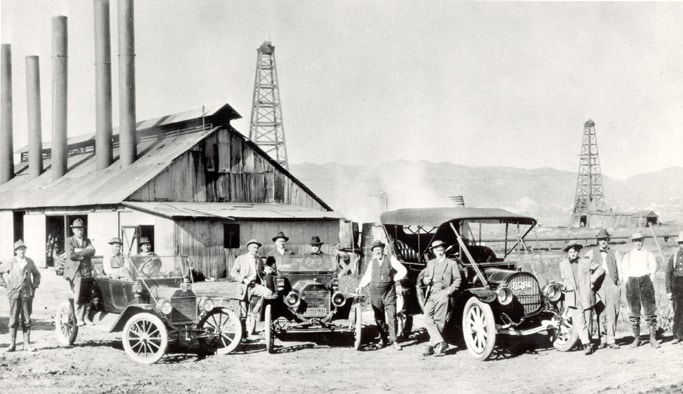 While the Farmer’s Market sits at the center of the city of Los Angeles today, in 1880 you had to travel quite a bit east to reach anything resembling a city, allowing the dairy farm to operate mostly in peace.

After about 20 years of relatively successful business Arthur Gilmore was drilling holes to find water in hopes of expanding his operation, and luck would have it that he happened to strike oil. Where Arthur once saw grazing fields, What was previously viewed as a grazing ground for his cows quickly became rich oil fields with limitless potential. The Gilmore Oil Company was founded shortly thereafter  in 1903.

The early days of Gilmore Oil yielded mostly petroleum and tar that was converted to lubrication and pavement. Interest in the automobile would grow, and Gilmore & Co. would quickly begin turning crude oil into gasoline and selling the gasoline.

The Young Gilmore Steps In

In 1918 Arthur Gilmore passed away, leaving the business to his son Earl Bell Gilmore. The business quickly went from selling gasoline from a horse-drawn carriage on the corner of 3rd and La Brea, to its first gas station at that same spot, followed by a whopping 3,000 additional gas stations built along the west coast. 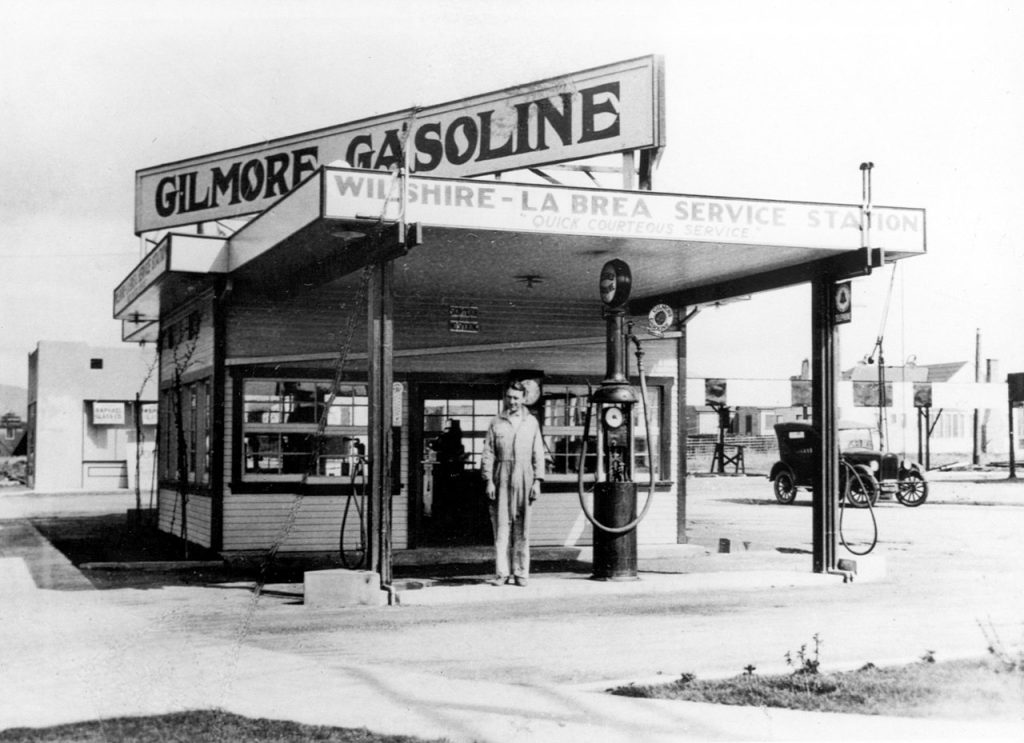 The young Gilmore had a unique and energetic approach to business, partnering with daredevils in the automotive community like John Cobb who would set the land speed record at the time of 369.7 miles per hour. He built a stadium that housed midget-car races, boxing matches and other events, as well as a baseball field that housed the wildly popular Hollywood Stars to the north. Gilmore land was actually very prominent for all manner of sporting events in Los Angeles.

Business was booming. The original Gilmore property at the site of the Farmer’s Market was renamed to Gilmore Island and a number of different businesses were established there.

In 1934 Earl Gilmore was approached by Fred Beck and Roger Dahlhjelm, who were two businessmen with an idea to build a small village on the corner where farmers could come and sell their products right out of their trucks. Earl allowed the businessman their idea, and it was a wild success. Both farmers and restaurant owners began setting up permanent stalls that same year, and the Farmer’s Market was born. 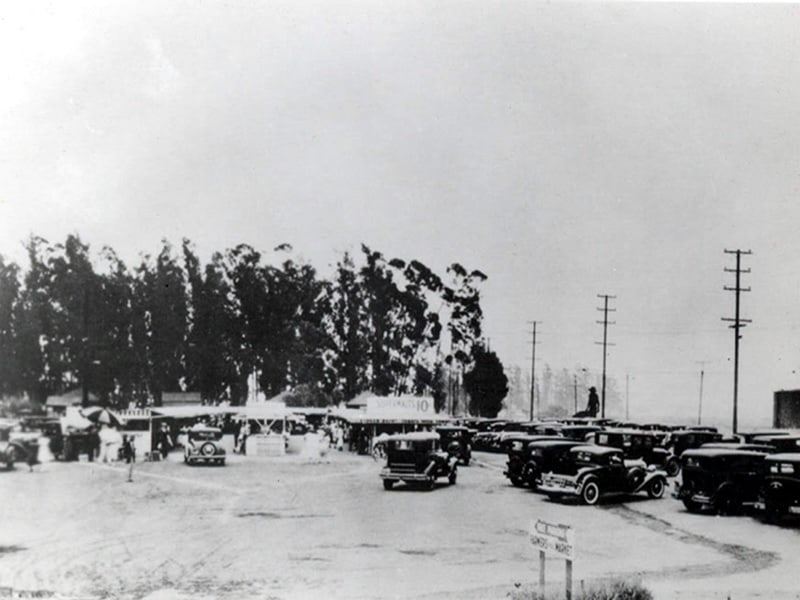 The Evolution of the Farmer’s Market: Hollywood’s Favorite Market

Hollywood and the Farmer’s Market have long-since been friends and business partners. The adjacent Gilmore Field attracted countless celebrities that were either involved in the promotional aspects or partial owners of the team. Bing Crosby, George Burns and Gracie Allen, Gary Cooper, Gene Autry, Bob Hope, Groucho Marx, Elizabeth Taylor and Cecil B. Demille were just some of them. 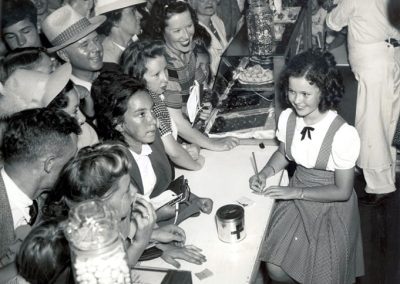 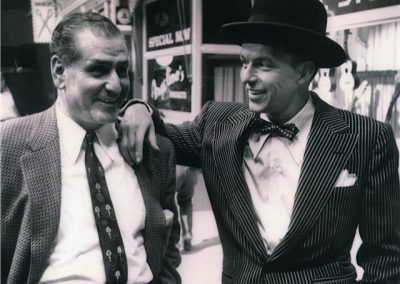 Frank Sinatra visits his pal at The Farmer’s Market 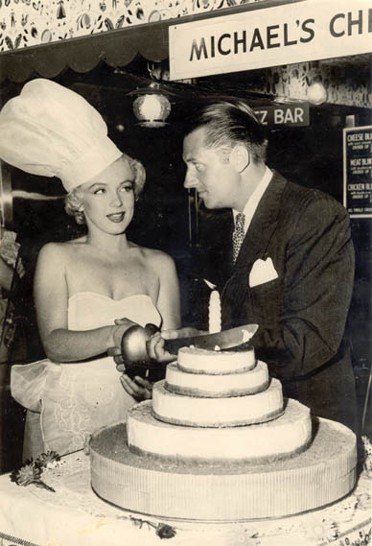 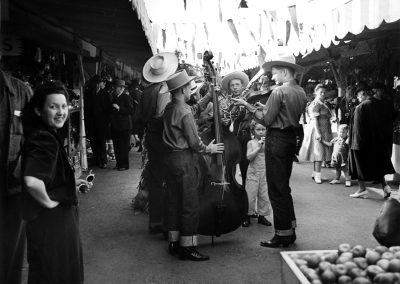 Musicians perform in the center of the Farmer’s Market 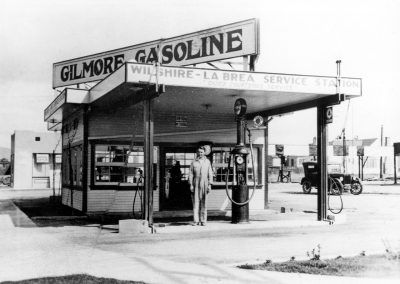 Not only that; The Farmer’s Market itself played host to a number of celebrities, perhaps most notable of them was a young Shirley Temple during the peak of her fame, working behind the counter at Brock’s Candies for a promotion for the Red Cross in 1936 (pictured below.) Ava Gardner was another favorite to visit, as was Marilyn Monroe during the opening of Micheal’s Cheesecake. Frank Sinatra, President Eisenhower, The Beatles, and more all were in the Farmer’s Market at one time or another. 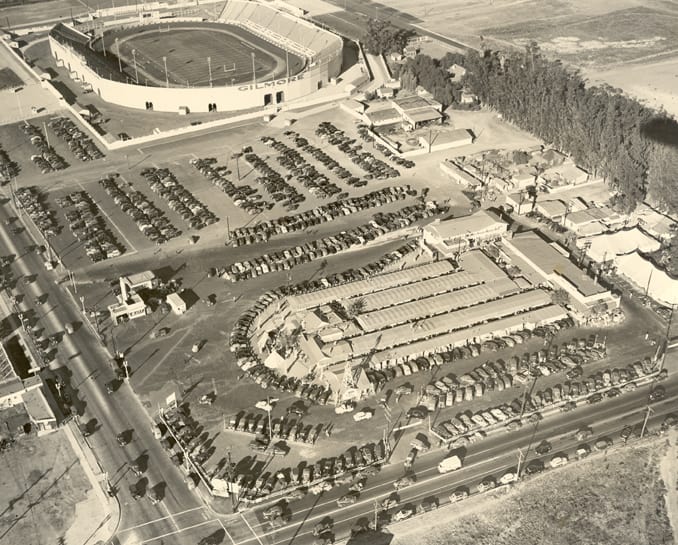 75% of Gilmore Oil was eventually bought out by Socony-Vacuum Oil Company in the late 1940s, eventually merging into the group that became Mobil, the gasoline company that you’re probably familiar with. You can still find an antique gasoline station display outside at the Farmer’s Market where their original gasoline station once stood. 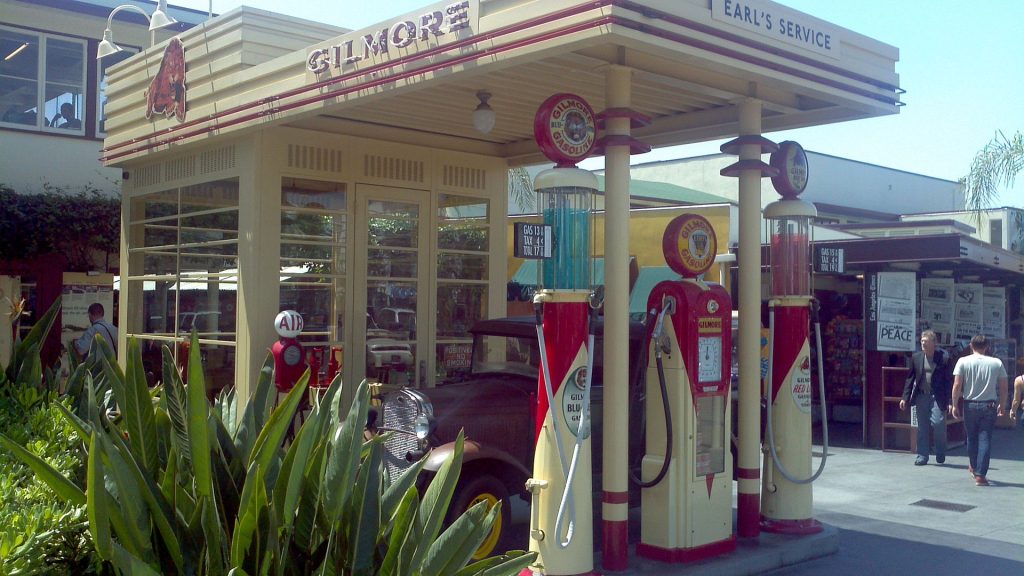 The Farmer’s Market remained open having taken on a life of its own by this time, and it continued to be a huge staple in Hollywood life. In the 1970s The Beach Boys indirectly refer to the Farmer’s Market in their song “H.E.L.P. Is On The Way”, mentioning that they ate at Fairfax and 3rd. Jimmy Kimmel regularly interviews patrons of the Farmer’s Market and does a great many bits within the outdoor eating area.

We love the Farmer’s Market at Surf City Tours – we couldn’t’ think of a better place to make a lunch stop if you only had one lunch stop to make in Los Angeles. Perhaps the most endearing and drawing aspect of the market is its history. Magee’s Kitchen, the very first restaurant to open at The Farmer’s Market way back in 1917, still stands to this day. You can still get their famous horse radish and hand-carved sandwiches that have been sold there for 100 years!

Du-Par’s Pie Shop is another nearly-ancient restaurant that serves up pure deliciousness.  Plenty of Meats, sausages, poultry, fruits, and grocery stalls are available for those who prefer to cook their own, but there are over 30 restaurants ranging from full course meals to smaller stalls that sell ice cream, snacks, cocktails: you name it. The most recent celebrity to enter the Farmer’s Market would be Danny Trejo: opening one of his wildly successful taco restaurants, Trejo’s Taco’s right inside the Market at stall 322.

Next door, The Grove has turned into one of the biggest shopping attractions in Los Angeles with its beautiful outdoor setting. Celebrities can be found shopping the larger-than-life Apple store, or just walking the beautifully paved roads. Keep an ear out for the trolley that transports folks from the Farmer’s Market to the far end of the Grove and back, and be sure to have a seat by the fountain for a quick water show if you’re visiting The Grove!