The History of Chinatown in Los Angeles 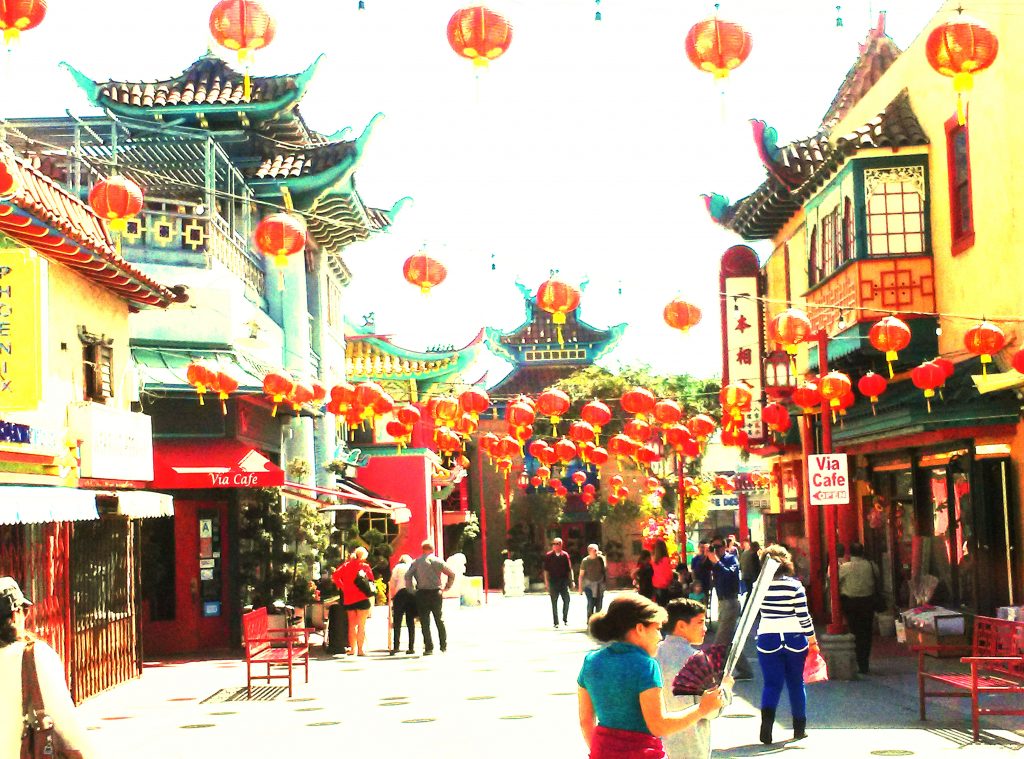 Chinatown is a living, breathing & bustling section of Los Angeles. It has frequently appeared as a backdrop to some of Hollywood’s greatest films (think Rush Hour starring Jackie Chan & Chris Tucker, among others), and visitors to the city of LA should most certainly find their way here to explore at some point on their trip.

Chinatown as we know it has been around since June of 1938, but there was actually another China town here in Los Angeles that had existed since the early 1800s. Let’s take a look at the story of how racial tensions and city expansion pushed back against Chinese influences on the city of Los Angeles, eventually leading to the development of the robust Chinatown that we see in the movies today. 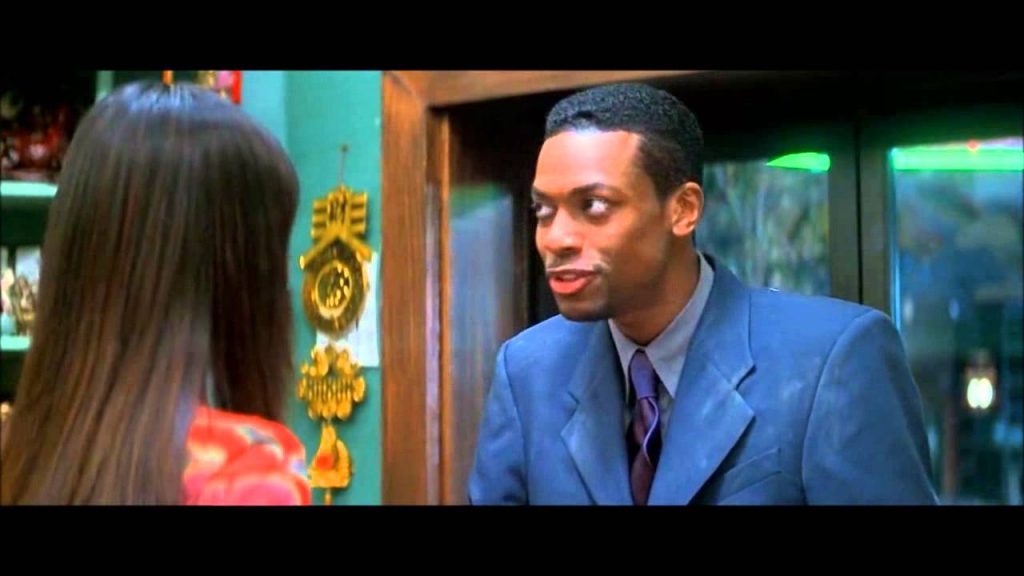 Chris Tucker visits the still-standing Foo Chow restaurant in Chinatown. This restaurant has literally written the fact that Rush Hour was filmed there onto the side of their building.

The Original Chinatown in Los Angeles

The Original Chinatown in Los Angeles was first developed in the mid 1800’s, right near the oldest part of the city on Olvera street, an area known as El Pueblo de Los Angeles Historical Monument. Back in China a huge population boom was causing shortages in food and land, pushing the locals further into poverty and spurring the migration of many to the Americas. Many of these immigrants found themselves in California because of the gold rush, working on the railroads and in the mines or agriculture.

The Chinese immigrants weren’t alone in this area. Little Italy, the French Colony, Sonoratown and Little Tokyo were all right up alongside Chinatown. Not too far away, a higher class of citizenship took place in Bunker Hill and other similar neighborhoods. By the year 1870 the city of Los Angeles census showed 5,000 citizens, with about 200 of those being Chinese, and about 100 of those 200 all lived on the same street, many in the same building known as the Coronel.

There were near-constant setbacks for the Chinese population here in Los Angeles throughout the 1800s and into the early 1900s. In the 1880s the Federal Chinese Exclusion act barred Chinese immigrants from becoming United States Citizens, and later in 1913 another law came into place that prevented the Chinese from buying land. Even still, by the year 1880 the city of Los Angeles that once had a mere 300 Chinese residents had boomed to at least 300,000. 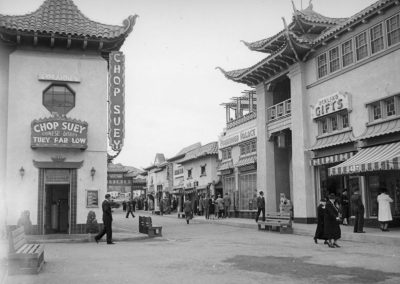 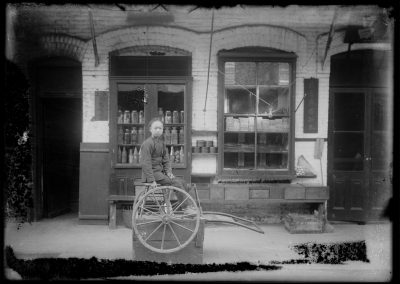 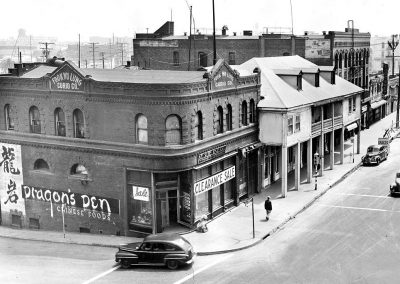 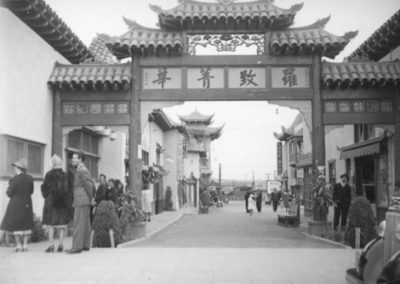 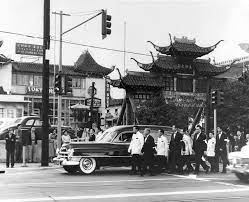 The Creation of Union Station & Destruction of Old Chinatown

Between the years of 1890 and 1910, old Chinatown flourished. Chinatown had its own newspaper, a telephone exchange, an opera theater, temples and much more spanning about 15 streets. They held parades for Chinese New Year and continued to expand despite the hurdles set in place. At the same time, the land that the old Chinatown was rested on became a target for various businessmen and capitalists looking to develop a rail line.

In 1914, a wealthy San Francisco businessman by the name of  L.F. Hanchett purchased 25 acres of land in the area with the proposition of building a series of warehouses. He immediately switched gears and began trying to secure the rights to develop a railroad station.

While these plans were unsuccessful and Chinatown as it was would remain for another 10 years or so, the pressure would only increase exponentially when, in 1926, residents were given the choice to vote on a new train station or an L train (elevated railway.) The train station was the elected option, and over the next 10 years the great majority of old Chinatown was torn down to make way for what’s now known as Union Station.

A small portion of old Chinatown survived the construction of Union Station, but these buildings were also demolished to make way for the 101 freeway in the 40s and 50s. Every building was demolished aside from one: a building known as the Garnier that was once filled with a combination of business and residential units. Today, the Garnier building can be found inside the El Pueblo de Los Angeles Historical Monument in its new form, the Chinese American Museum.

The Garnier building is the only building left standing from the original Chinatown here in Los Angeles that had existed since about 1850.

The 7,200 square foot Chinese American Museum (CAM) can be found inside the El Pueblo de Historical Monument, a 44-acre public park known as the birthplace of Los Angeles. The Garnier building that houses the museum was built in 1890 by a French settler and prominent businessman, Philippe Garnier, who immediately leased the building to Chinese American merchants. The Garnier building would be considered the most significant Chinese building in California, deeply linking the Chinese community to the earliest days of the city of Los Angeles.

The Chinese American Museum features a range of exhibits further exploring the history of the original China Town in Los Angeles and the stories of those that travelled here in search of work & a better life.

The Chinese American Museum or CAM is open for small parties or groups, visit their website for more details https://camla.org/ 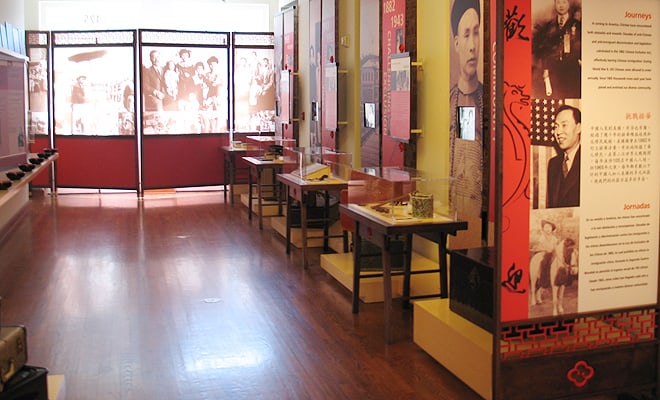 Peter Soo Hoo organized a band of 28 other Chinese businessmen to develop the new Chinatown in Los Angeles.

Born in the original Chinatown in 1900, Peter Soo Hoo was the very first Chinese American to be employed as an engineer at the Department of Water & Power after graduating from USC in 1923. Being born in Old Chinatown, Chinese immigrants being forced out to make way for Union Station was an issue very much on his radar, and so when he stumbled across the old Santa Fe Railway land nearby the abandoned Los Angeles aqueduct he fostered an idea that would forever carve out a section of Los Angeles dedicated to the Chinese community, and a new home for all the residents suddenly left without one.

Land laws in California prevented him from buying property in his name, so Peter formed a partnership with a white Santa Fe Railroad agent by the name of Herbert Lapham. A large purchase of land was made for 75 cents for square foot, and a forward movement of 28 shop owners, restauranteurs, and other businessmen from old Chinatown who were being forced out came together to start the construction of what is now the beautiful Chinatown in the heart downtown Los Angeles. Chinatown’s central plaza was debuted in 1938 right between historic Broadway & Hill St. in Downtown. the words “Cooperate to Achieve” are Beautifully inscribed via Chinese Characters into the top of the 150-year old Camphor wooden West Gate of New Chinatown, commemorating the original 28 that came together to put their mark yet again on Los Angeles.

Visiting Chinatown On Your Trip to Los Angeles 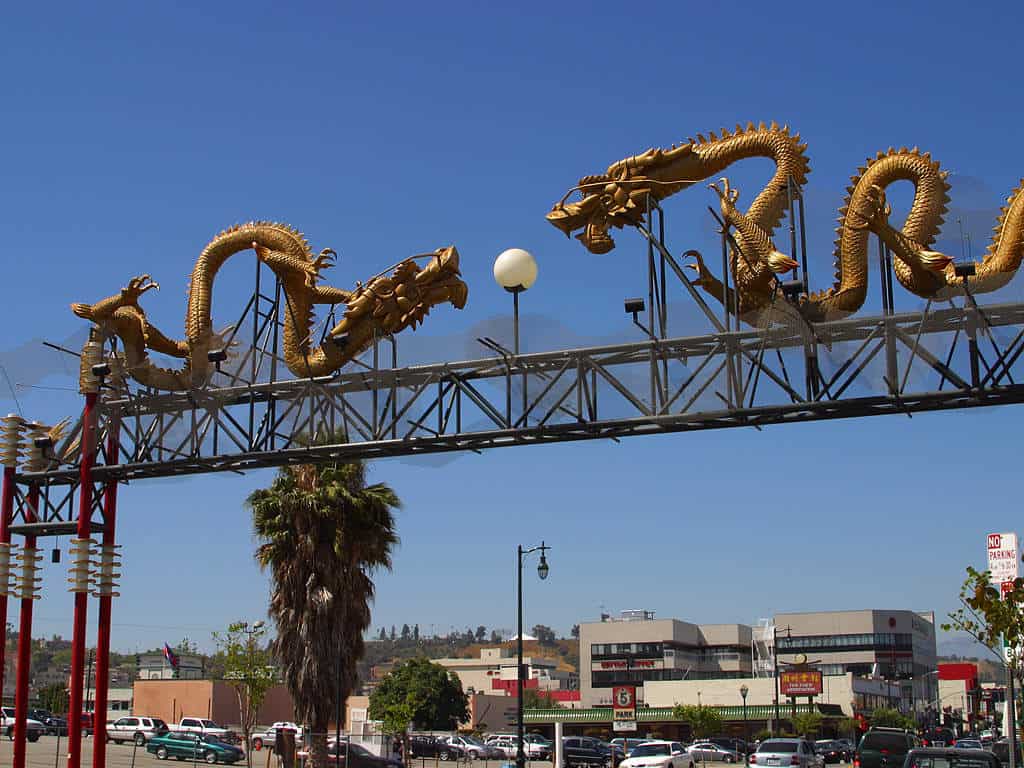 It’s hard to miss China town. Once you see the Dragon gate you know you’ve made it!

If you’re a tourist visiting Los Angeles, you’ll definitely want to set some time aside to have a stroll through Chinatown. A combination of recently-opened hip restaurants and longstanding establishments of the Chinese community here in Los Angeles are all condensed. You’ll find a range of restaurants, museums, clothing shops, art galleries, toy stores, food and farmers markets, various practices such as acupuncturists and herbal healers, along with countless other types of businesses. Chinatown is also a residential neighborhood that is home to about 20,000 primarily Chinese residents.

The Gold Line train station connects Chinatown to various parts of Downtown like Union Station as well as all the way west to the beach in Santa Monica (where our office is located) so you can definitely consider public transportation and avoid parking altogether. That being said, there are many parking lots in the area. Keep in mind that Chinatown is a very dense area surrounded by an equally dense Downtown Los Angeles, so you might have to visit a few lots if the first option is full. Check out this link for the various parking options in the area. Parking along Hill St. or Spring St. is an ideal location for a lot of people, depending on which shops or restaurants interest you the most. You can walk almost anywhere in Chinatown though, so you don’t have to stress which lot too much. 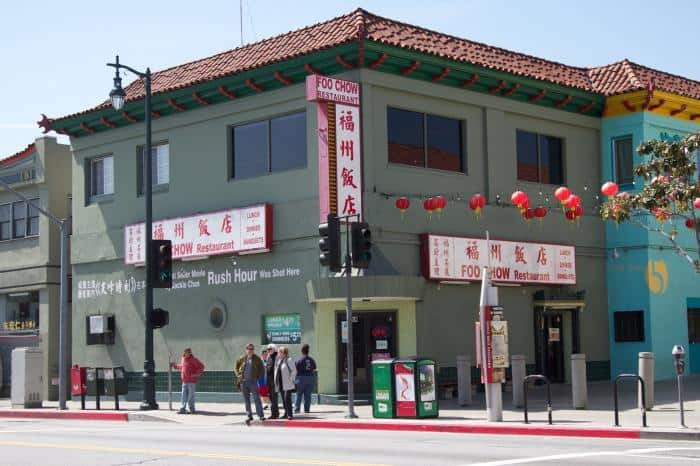 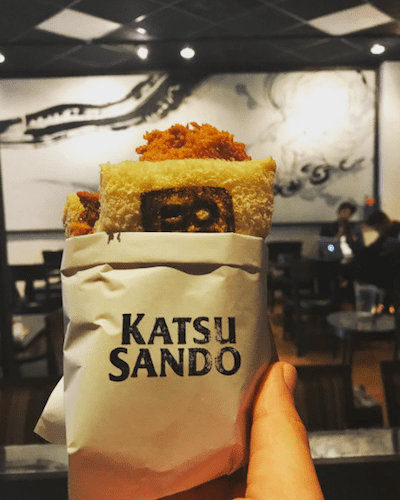 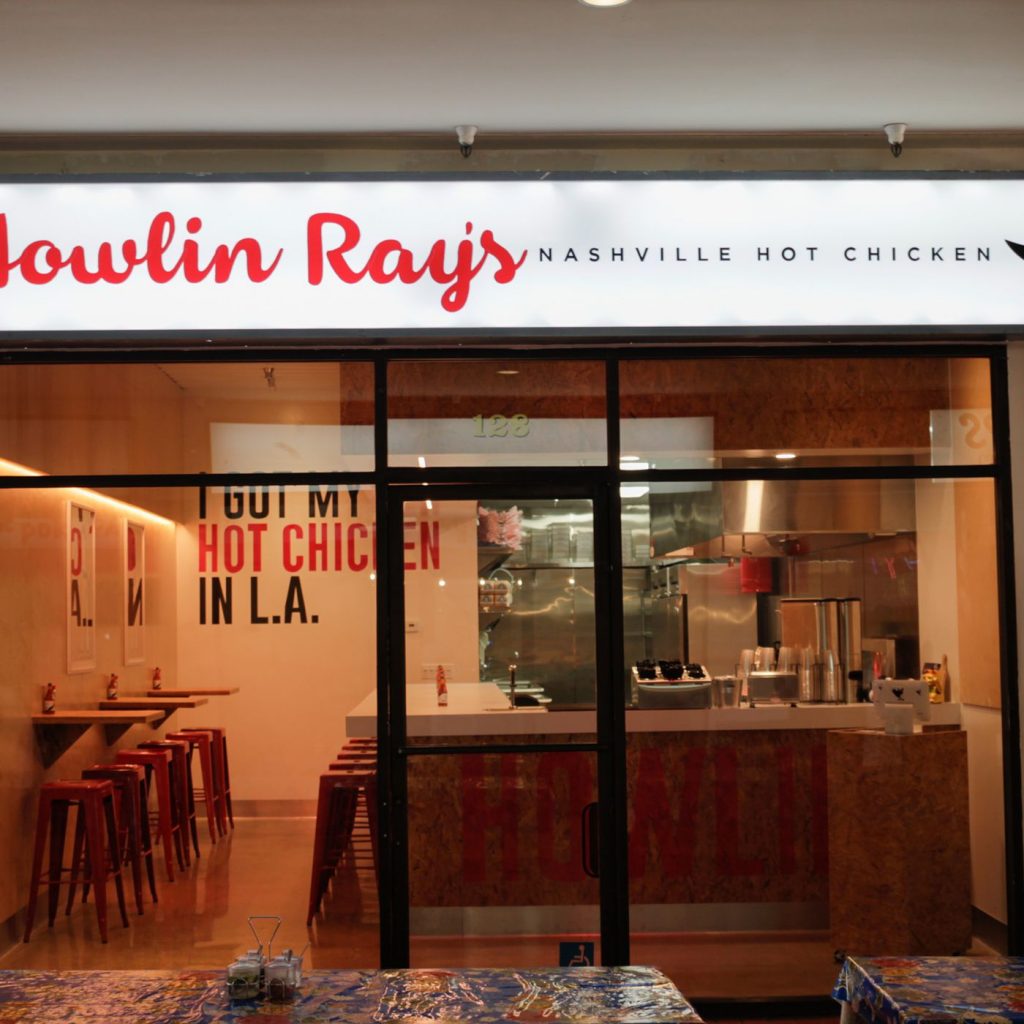 Hot Nashville sandwiches, extremely popular. If you’re into spicy, stop in at Howlin’ Ray’s. Do a quick Youtube search if you’re interested in seeing a few people burn their faces off. 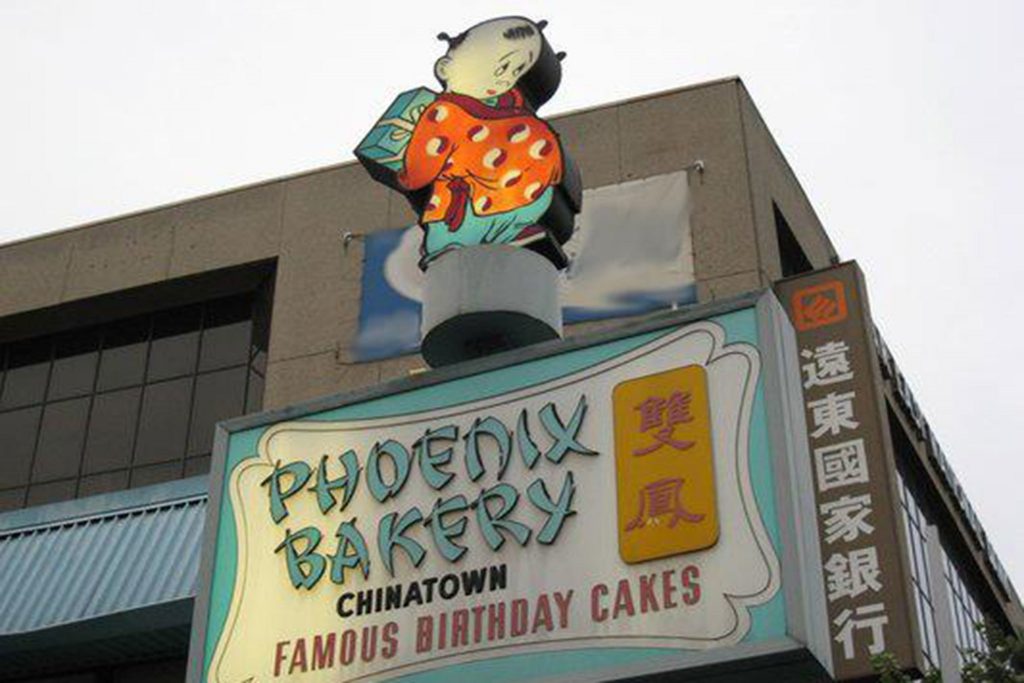 Known for their world-famous strawberry cream cakes and fresh buns, the Phoenix Bakery is a longstanding establishment in Chinatown with mooncakes during the Lunar New Year that bring people in droves.

Chinatown has tons of amazing shopping opportunities – you can truly spend all day exploring the various stores for knick-knacks, decorations for the home, clothing, jewelry, gadgets & toys, electronics, books, and a lot more.

For shopping, you’re going to probably want to head to the Saigon Plaza, Chinatown Plaza, & Dynasty Center trifecta of shopping greatness. You can find this by typing 800 N Broadway into your GPS. Here you’ll be able to find every single thing listed in the previous paragraph, and a lot more. There’s also plenty of food options in the area, so you really never have to leave if you’re planning on doing some serious shopping/browsing.