The History of Grauman’s Egyptian Theatre

The History of the Egyptian Theater 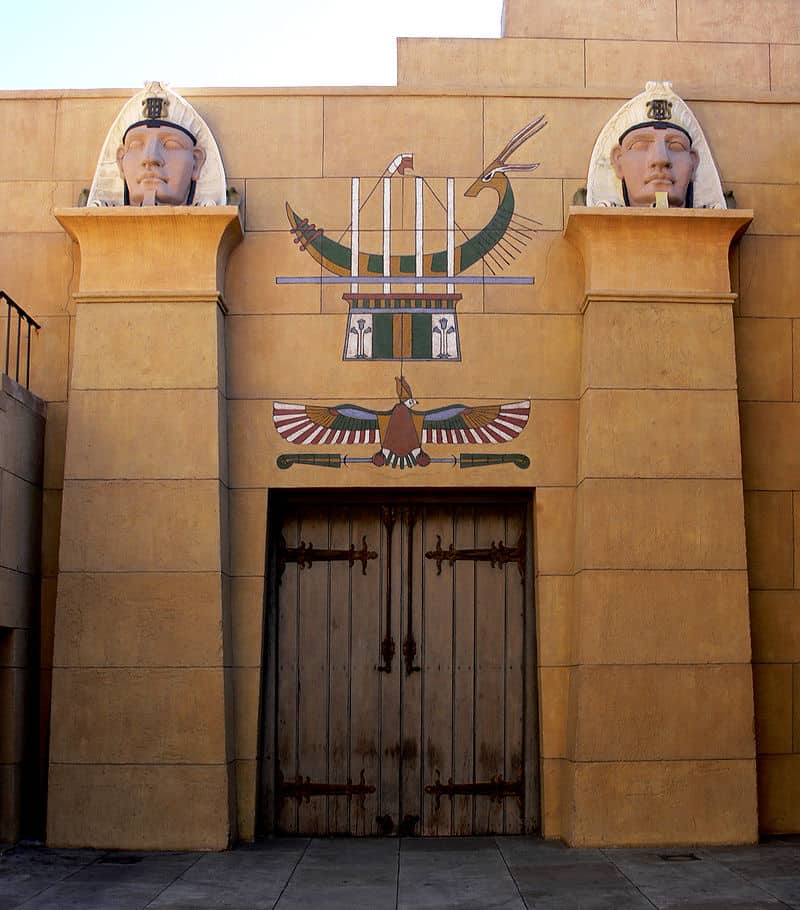 Most people think of Netflix as the death of the movie theater as we know it, or at least most people feel that the magic and mystique surrounding a visit to the movie theater has been severely diminished with the advent of high-speed internet connections and rampant movie streaming. It’s funny, then, that Netflix has actually stepped in as the savior of one of Hollywood’s most historic and ancient theaters: The Egyptian Theater.

The Egyptian Theatre is an iconic cultural-themed theater right on the Hollywood Walk of Fame that predates the Chinese Theater but often goes unnoticed. At the end of this post we’ll also take a look at Netflix’s acquisition of the landmark and what the future might hold for the theatre.

The Birth of the Egyptian Theatre

The Egyptian theatre was a project undertaken by the illustrious showman Sid Grauman and a large player in Hollywood Real Estate at the time, Charles E. Toberman. This duo would go on to develop the El Capitan theatre nearby, as well as perhaps their most famous venture, the Chinese Theatre right in the heart of Hollywood. It took about 18 months to construct, and shortly after completion was the site of Hollywood’s first ever movie premiere. The Egyptian’s official opening night was on October 18th, 1922. 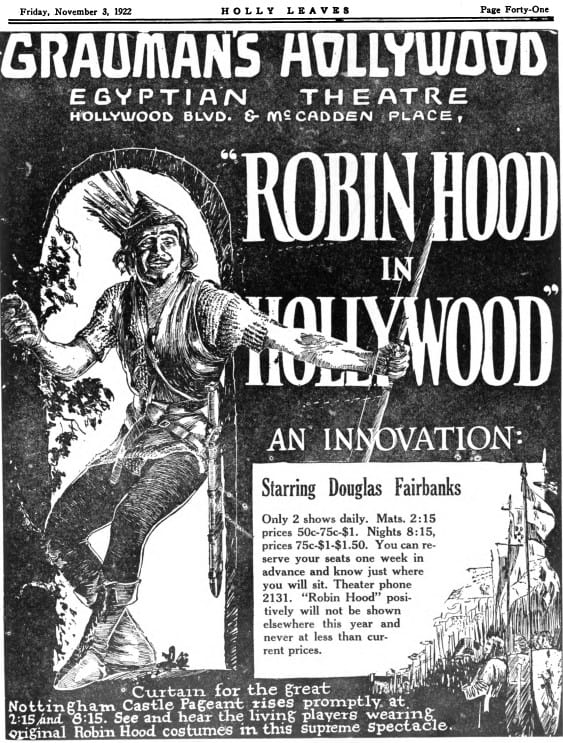 While the Egyptian Theatre cost a reported $800,000 to construct, the movie for which it housed its first premiere cost even more than that. With a million-dollar budget, Robin Hood starring Douglas Fairbanks graced the screens of the Egyptian on its opening night. It was a huge hit and a monumental step forward in the glamorization of Hollywood and Hollywood’s players in the early 20s and 30s. These palace-style theaters helped to sell a very particular image to the American people, and the people were definitely buying.

Douglas Fairbanks himself attended the premiere, with his wife Mary Pickford and friend Charlie Chaplin to name just a few other big names in the room, and those were just the ones who arrived with Douglas. In addition to the star-studded audience, the premiere featured a dazzling prologue performed onstage prior to the screening. The admission price was a whopping $5, with evening admissions coming in at $1.50.

Another major premiere occurring at the Egyptian was Cecil B. Demille’s 1923 The Ten Commandments. By the 1930s, there were over 100 Egyptian-styled theaters across America, with the discovery of the Tomb of King Tut setting off a wave of excitement in 1922 that carried on into the next few decades and beyond. 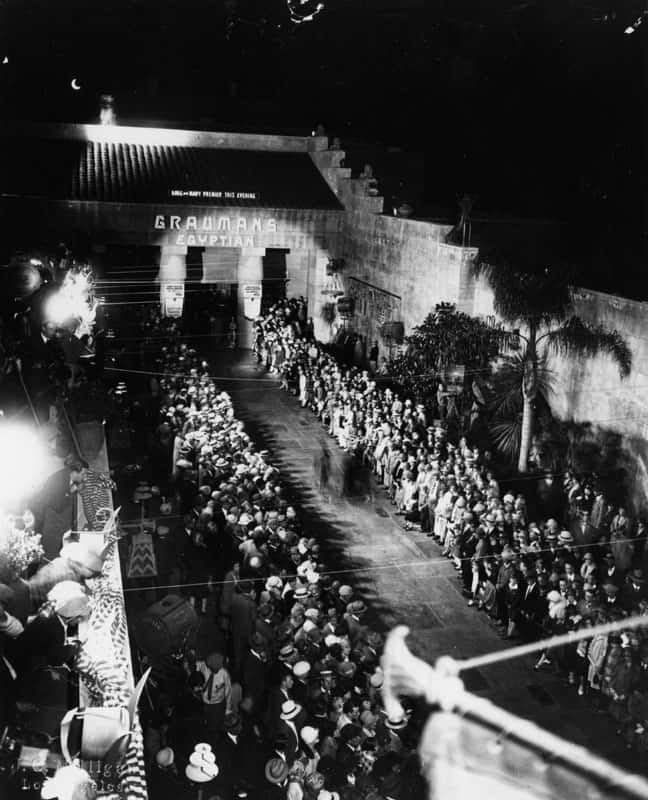 The Egyptian Theater was referred to for the first few years as “Grauman’s Hollywood Theatre”, but shortly thereafter in 1927 Grauman opened the Chinese Theater down the road. This location eventually surpassed and overshadowed the Egyptian Theatre in popularity, likely because of its addition of footprints and handprints along with signatures of celebrities out in the front courtyard for all to see. To this day the Chinese Theatre’s courtyard is the most iconic section on the Hollywood Walk of Fame, and the most-often visited. If you asked just about anyone what Grauman’s Hollywood Theater was today, they’d probably tell you it was the Chinese without even considering the El Capitan or the Egyptian. Still, these historic theaters captured some of Hollywood’s rawest and youngest energies of the 1900s and will forever be known in History as one of the birthplaces of Hollywood.

The Egyptian Theatre Through the 1900s

Although popularity quickly shifted over to its neighboring Chinese Theatre, the Egyptian Theatre continued to host countless movie premieres and remained open right up until the end of the 1900s.

The luster and appeal of Hollywood proper began to decline in the 80s and 90s, sending the Egyptian Theatre into disrepair and eventual closure in 1992.

After a few years, The American Cinematheque (an independent, non-profit cultural organization) purchased the Egyptian Theatre from the Community Redevelopment Agency of Los Angeles for a buck. Yep, literally one American Dollar. The requirements surrounding the deal would be that the Cinematheque would restore the Egyptian Theatre to its former glory and eventually reopen the doors for public film exhibition. A few years later in 1998 the money had all been raised and the holes had all been filled in: the Egyptian Theatre opened its doors again with a more-limited capacity (previously seating 1,760, the renovations boasted a second screening room and seated 616 patrons, with 78 seats in the second room.)

The Future of the Egyptian Theatre: Netflix Purchases Hollywood History

In 2019 it was revealed that Netflix was interested in purchasing the theatre from the non-profit organization. And then, just like that, right during the peak of the Coronavirus pandemic, the deal went through and Netflix became the proud owners of the Egyptian Theater in May of 2020. It is rumored that Netflix plans to use the theatre as a qualifying screening room for its series and movie releases. This to me seems to be a smart move for Netflix, cementing their place among Hollywood’s elite and letting people know that they are on the same level as a Universal Studios or a Paramount studios when it comes to film production.

Indeed, the road has been a rocky one for Grauman’s first Theatre on the Hollywood Walk of Fame, but the future is looking very bright for our beloved Egyptian Theatre. I myself am very excited to see what Netflix decides to use the Theatre for, and how they intend to restore the film production industry to its former glory with a new take on what it means to be in the production industry. 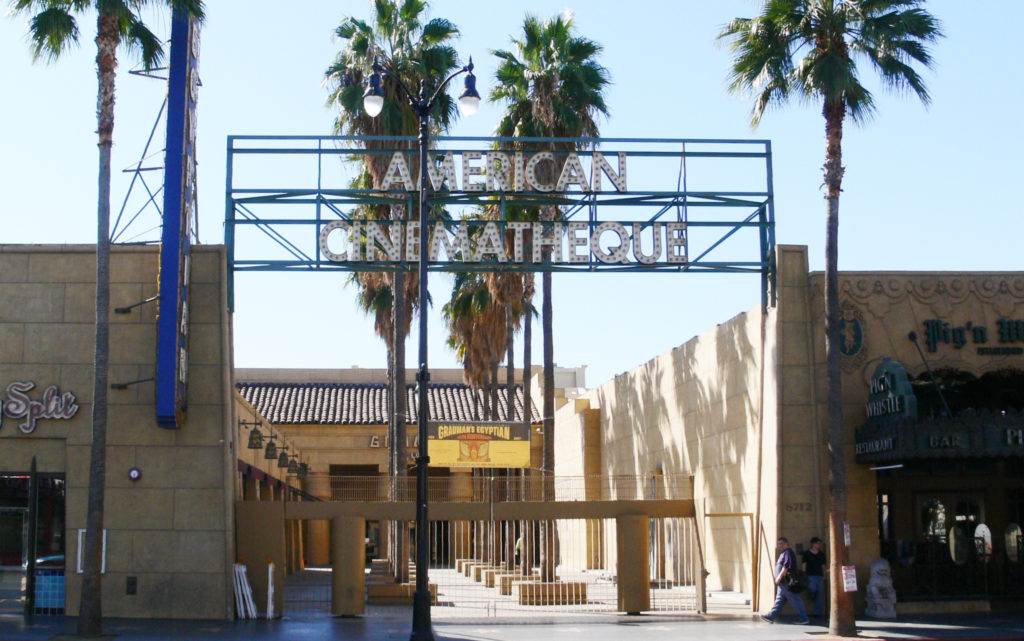