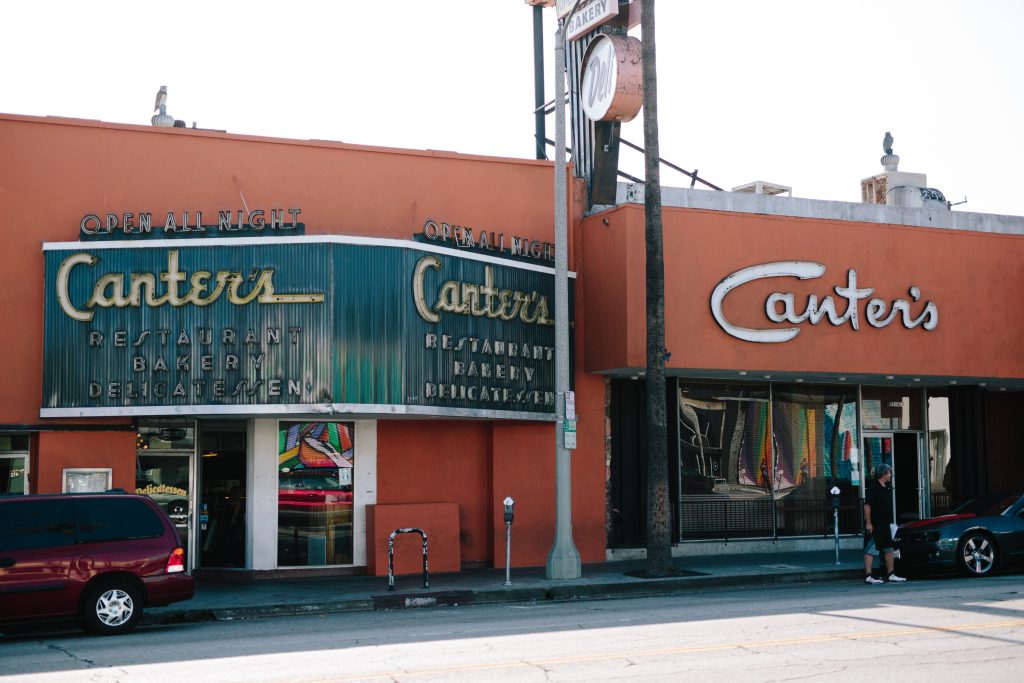 The earliest memories of Canter’s Deli on Fairfax that I have are from stopping in for a burger with Grandma Judy. She was partly Jewish and an activist/lawyer for LA union workers in her younger days, so a very outspoken grandmother she was. I’ve always known that Canter’s has had a vibrant past and stood for something good. It has been around forever, so I’m excited to share the story of Canter’s Deli with you today.

The original Canter’s was opened in New Jersey in 1924. In 1929 the stock market crash forced the restaurant to close its doors, and Ben Canter took his two brothers to California with $500 between the three of them.

By 1931, the three Canters had opened Canter’s Brother’s Delicatessen in Boyle Heights. A good portion of the Jewish community that had come to Los Angeles had found themselves in Boyle Heights in the early 30s, so this location made sense at the time. 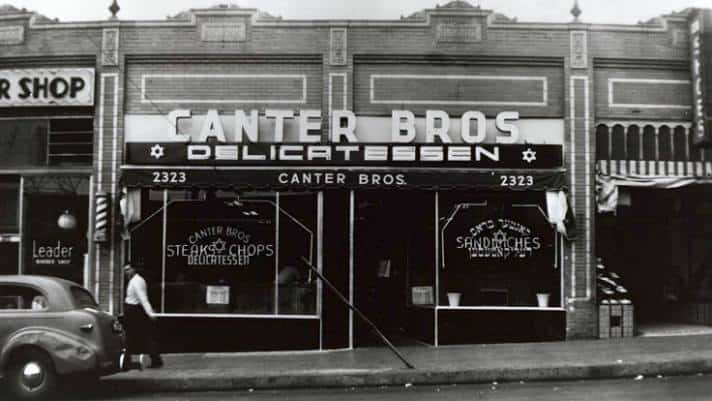 As the neighborhood changed, the Canter’s brothers decided it was time for a move and sought out real-estate in the blossoming community westward of Boyle Heights on Fairfax Ave. in the present-day Fairfax District/Miracle Mile district. They settled on 439 Fairfax Ave. and opened Canter’s Fairfax. This location wouldn’t last and is currently the residence of the stunningly popular Supreme store. When the old Esquire Theater building became available just up the street, they purchased the larger location and made the move. 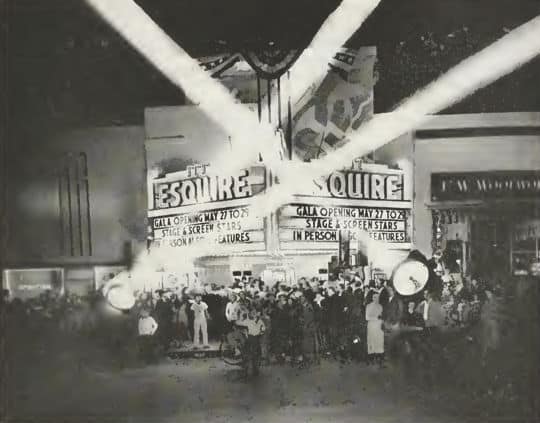 Pictured: The Esquire Theater that was purchased by the Canter brothers and transformed into the Canter’s Deli that still stands today. The theater-style marquee sign out front and the tall ceilings inside Canter’s are one of the few things that remain to hint at the buildings original purpose. Check out the sign in this picture and compare it to the Canter’s sign up at the top!

Towards the end of the 1950s the Butcher shop next door became available. They purchased the butcher shop and connected the two stores, expanding their menu to something much closer to what you’d find in your Canter’s booth today.

Through the deli and seating area, there at the back of the restaurant sits the Kibitz Room, a small bar with a big history.

The Kibitz Room is a bar within the restaurant. It opened in 1961, and became a popular place for the counter culture and rock & roll in the 60s and 70s. Jim Morrison and Frank Zappa would visit for cheap beers, but there was not much in terms of actual music performed at the Kibitz Room until 1989 when a jazz musician by the name of Eric Gold started doing Jazz nights on Mondays. This drew the attention of Jakob Dylan, son of Bob Dylan, who was the lead singer for a band by the name of The Apples at the time. He became a regular, and eventually interviewed a new keyboardist by the name of Rami Jaffee. Rami joined The Apples on the spot after listening to their music in the car outside, and this is where a lot of the initial practices were hosted for The Apples, who would eventually become The Wallflowers and credit Canter’s as their place of birthing. 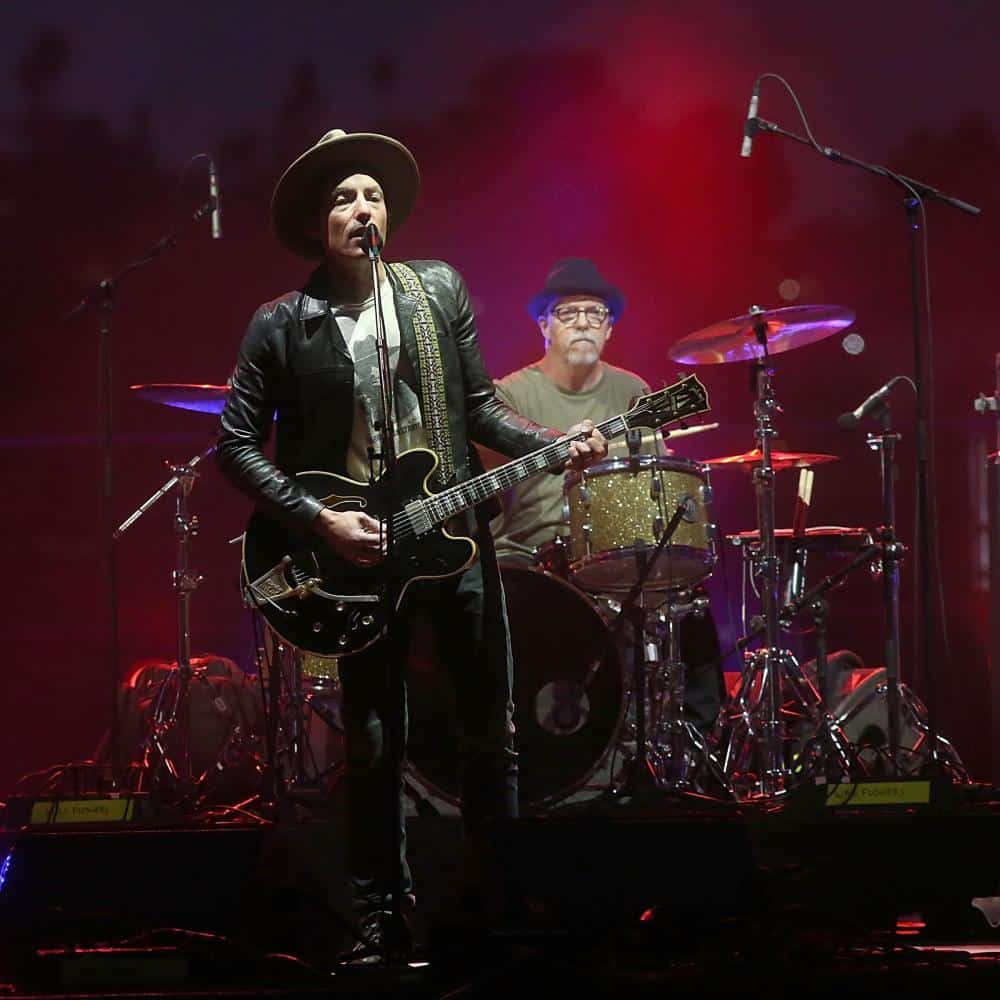 The Wallflowers met and produced their sound within the mustard-y, corned beefed walls of the Kibitz Room

In the 50s canter’s deli was visited by Marilyn Monroe and Arthur Miller, as well as Jack Benny & Elizabeth Taylor. Muhammad Ali, Wilt Chamberlain, Mel Brooks, Prince, John Travolta, Stevie Wonder, Michael Mann, Dick Van Dyke, Jim Morrison and Frank Zappa, Bill Cosby, Wayne Gretzky, Taylor Swift, Mick Jagger, Guns N’ Roses (constantly), and about a gazillion other celebrities, and that isn’t even begining to dig into all the Rock & Roll legends brought in by the Kibitz room in the 90s and beyond. Check out our Kibitz Room article for all of that information. 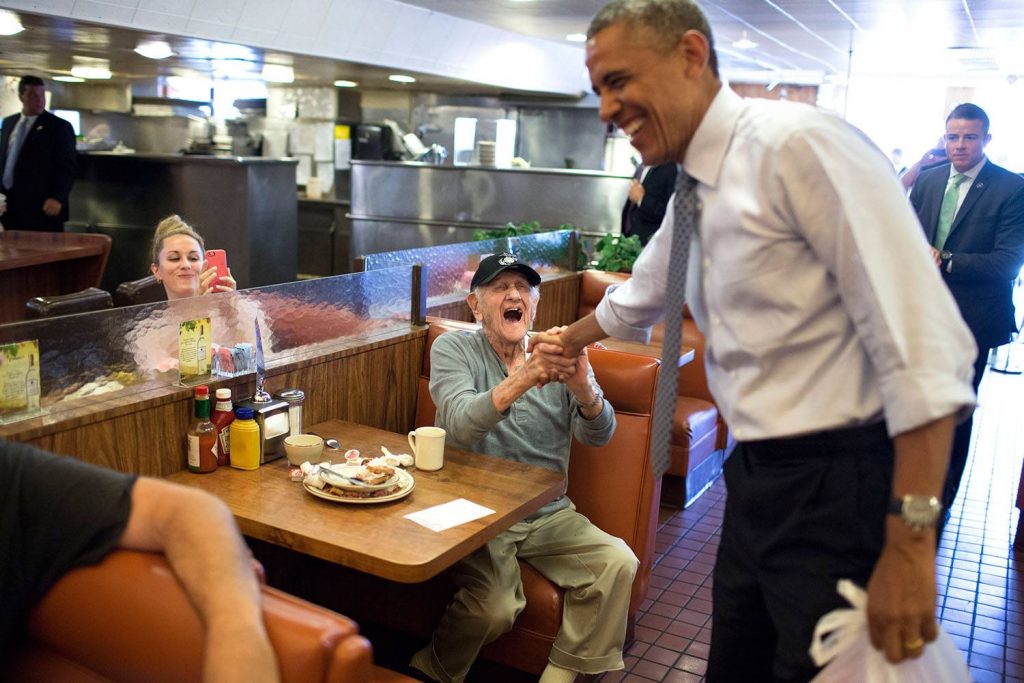 Barack Obama made a visit to Canter’s Deli in 2014 to chat it up with the patrons as they noshed on in disbelief. John F. Kennedy also dined at Canter’s but I couldn’t find a picture 🙁

Celebrities are known to sneak in at 3AM incognito because of the restaurant being open 24 hours and so close to CBS studios. Canter’s Deli is known as the meeting place of Nicholas Cage and his soon-to-be wife Patricia Arquette. He proposed to her a few hours later, to which she declined. Instead, the 18-year-old Arquette came up with a list of treasures and trinkets for him to obtain in order to gain her hand in marriage. Weird, right? 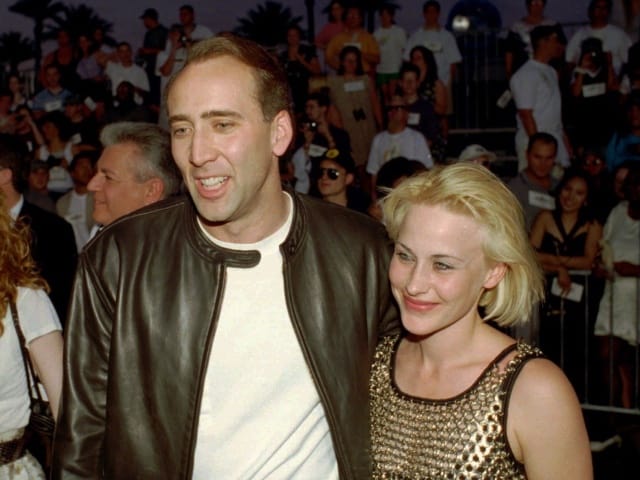 Patricia Arquette and Nicolas Cage first met in Canter’s and it led to some very unique wooing. 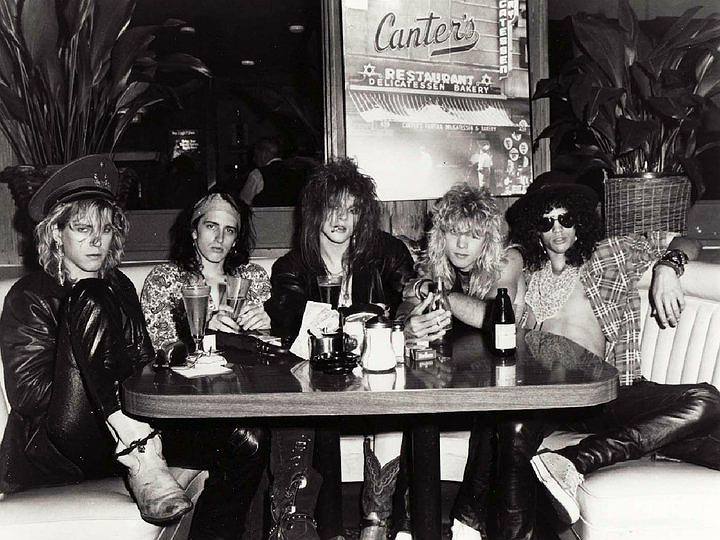 Celebrities have spontaneously proposed and eaten many meals here, it’s a good spot for a paparazzi to set up and for all of those reasons and more it has also made its appearance on the camera as well in film and television. Canter’s appeared in Mad Men (season 7 episode 1), Curb Your Enthusiasm (The Blind Date episode), Enemy of the State, Be Cool, and Entourage (Berried Alive episode).

Mad Men features Canter’s prominently and the restaurant is even discussed in the dialogue of the episode – Jon Hamm’s character actaully says the bagels suck!!

Canter’s Deli was awarded the #1 Pastrami Sandwich by the LA Times. They have received accolades for their charity from work from the City of Hope, as well as letters of thanks from Jerry Lewis and the Musclary Dystrophy Association for food donations. 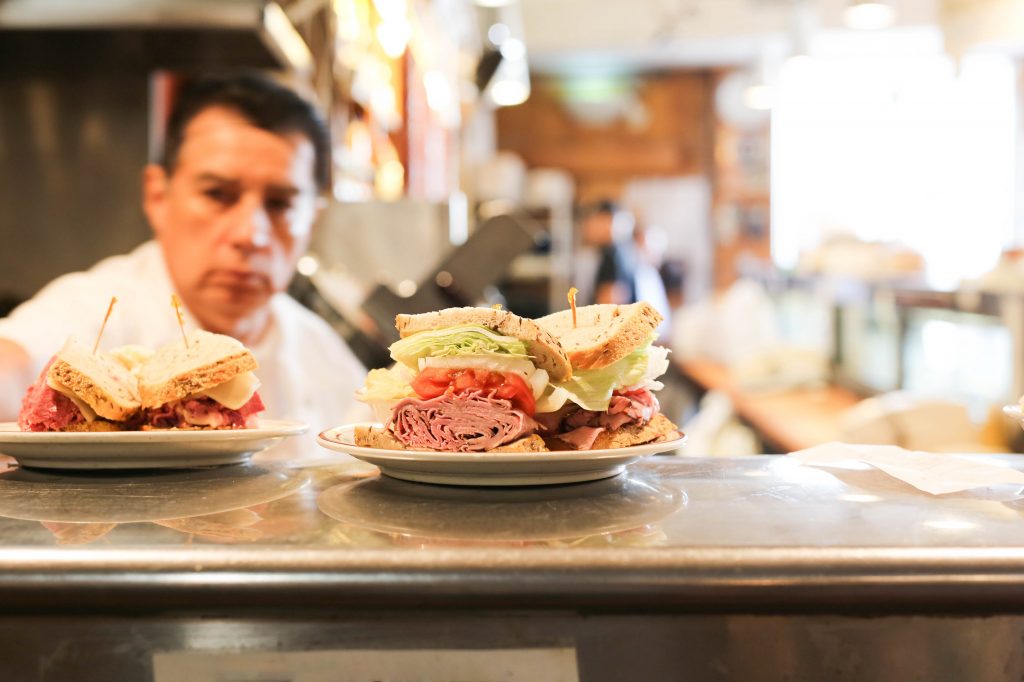 Canter’s was given the award for “Best Waffle in Los Angeles” by Los Angeles Magazine, and Esquire magazine dubbed their Monte Cristo one of the best sandwiches in America. The food is good. Really good. 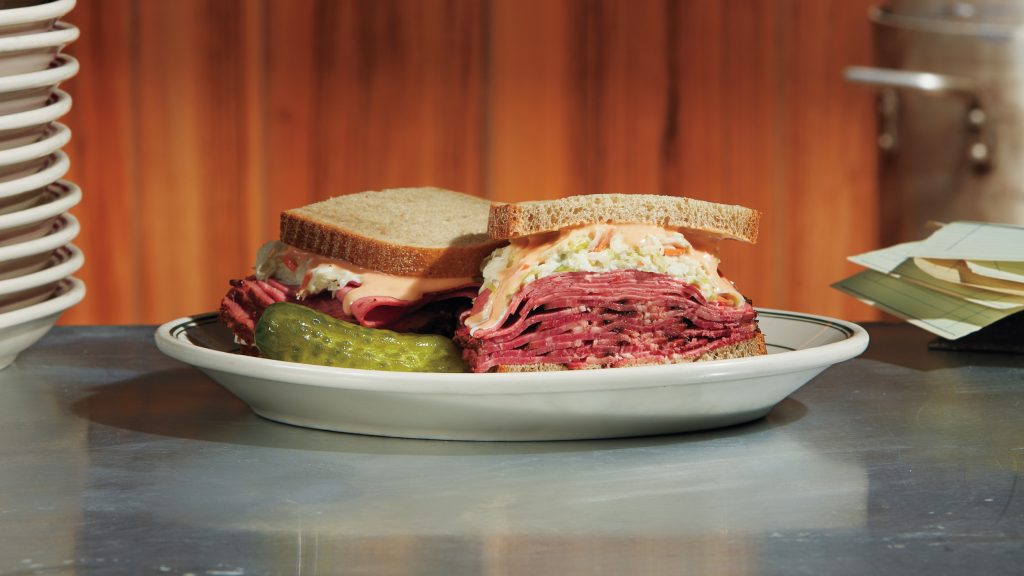 Canter’s Deli’s famous Pastrami sandwich was briefly available at Dodger’s Stadium right alongside the Dodger Dog with a Canter’s outlet, but this was eventually replaced by Dodgertown Deli in 2011. They even made a run on Vegas with a restaurant in the Treasure Island Hotel and Casino in 2003. This restaurant lasted a solid 9 years, but unfortunately closed its doors in 2012. A few years back they took another stab at it and announced they would be opening a restaurant on the Las Vegas strip. Doors opened in Tivoli Village as well as at the Linq Promenade alongside In-n-Out Burger, but by March of 2019 both of these restaurants would close. While their ventures out of LA county have proven difficult, this restaurant remains one of the most prominent Jewish delis on the west coast.

Canter’s is a  New-York-style Jewish deli that has been uniquely intertwined with the subculture of Rock & Roll, the glamor of Hollywood, and the unrelenting spirit to push forward that took over in the Jewish community after the end of World War 2 in 1945. Few Delis are afforded the benefit of having celebrities walking through their doors on a daily basis, but Canter’s deserves it. The large bakery and deli right in the front of the store are both supremely popular for those on the move, and you can sit down for a nosh in the Kibitz room or grab a booth anywhere, 24 hours a day – just not on Jewish holidays.