The Hollywood Sign is perhaps the single-most recognizable landmark in Los Angeles, and with our experience as tour operators here in the city we can tell you that it is the most commonly asked about and requested site to visit. Everybody wants to get their photo with the sign, and everyone knows that the sign is synonymous with the film industry.

The Hollywood Sign is the among the most photographed locations in the beautiful and sprawling state of California, and that’s saying a lot because there are some really amazing things here. The sign is approaching its 100th anniversary in 2023, so let’s take it back to the beginning and learn just how the Hollywood Sign came to be.

The Birth of Hollywood

The very first house in the Hollywood area was an adobe building constructed in 1853, at the time Los Angeles was just a tiny little city in a newly-founded state, with California itself being organized and admitted to the union just a few years prior in 1850.

In 1887 the area of Hollywood was officially laid out for real estate by Harvey Wilcox, a gentleman from Kansas who intended to build a community based on his sober and religious, prohibitionist principals.

H.J. Whitley, The Father of Hollywood, turned the Hollywood area into an exclusive residential location for the wealthier residents of California shortly thereafter, but in 1910 they decided to incorporate Hollywood into the greater city of Los Angeles because of issues maintaining healthy water supplies as the town grew. This is still the case, which is why, when excited tourists tell us that they are already in Hollywood and want to know how to get to Los Angeles, we simply reply that they are already there!

Why are Films Filmed in Hollywood?

The very first movie to be filmed in Hollywood was a movie of quite a bit of historical significance for film being one of the first ever storytelling movies of its time, The Count of Monte Cristo. Interestingly enough, The Count was never meant to be filmed in Hollywood and instead was slated for full production in Chicago. Poor weather in the Windy City of Chicago in 1908 forced film crews on rigid filming schedules down to the bourgeoning Hollywood, California area instead of waiting out the storm back in Chicago.

This single project would spark a fire that would soon turn into a blaze. Nestor Studios was opened in 1911 by Al Christie and David Horsley as the first ever film studio in Hollywood, *ever*, right off Sunset Boulevard in the heart of Hollywood. The studio was headquartered on the corner of Sunset and Gower at the Blondeau Tavern, with a production stage in the back.

Almost immediately barns were being turned into filming studios around Hollywood, with 15 independent studios opening in addition to Nestor Studios in that same year. By 1915, Hollywood was already seen as a major player in the film industry and would-be celebrities were travelling from far and wide to get a chance to be a star, with the forces of progress in Hollywood capitalizing on this new and growing industry to propel their special city to the top. 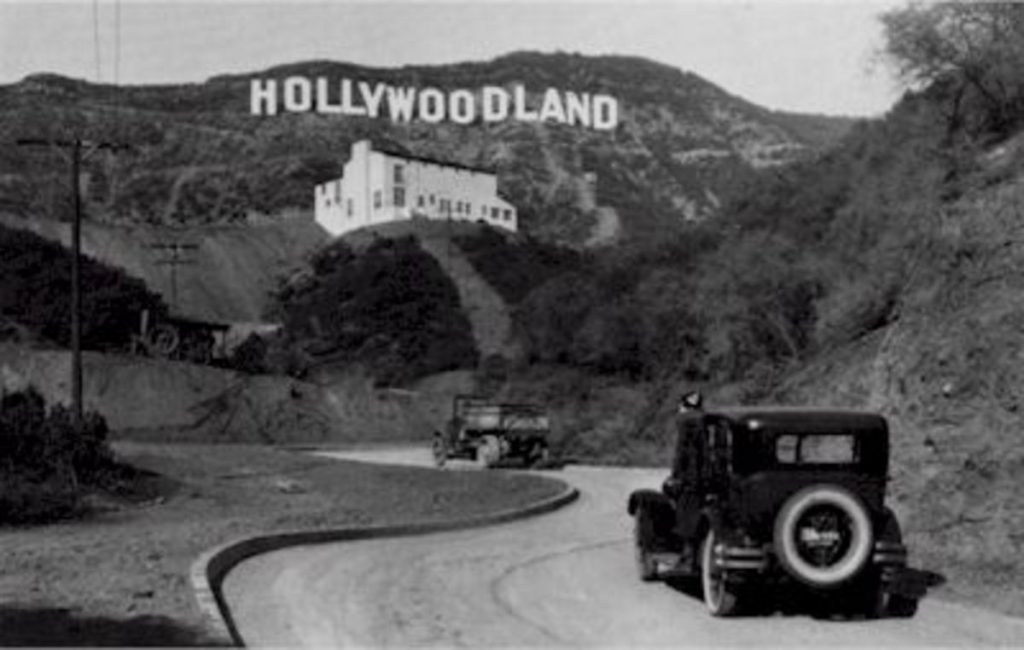 This comes as a shock to many, but when the Hollywood sign first graced what are now known as the Hollywood Hills it had nothing to do with movies or film. In fact, The first sign read out “HollywoodLand” and was built in 1923 to advertise the HollywoodLand real estate company. The company was owned by Harry Chandler, former publisher for the Los Angeles Times who dealt mainly in swanky, upscale emerging properties in the Hollywood & greater Los Angeles area in the early 1920s. The sign was only intended to exist for a period of 18 months and cost him a total of $21,000.

The sign itself was constructed of 3×9 foot metal squares that were connecting through a series of scaffoldings, pipe, wiring, and even telephone poles were used at the time of its construction. Laborers had to carry all of the materials needed to build the sign up basic dirt roads, making for quite a grueling job on the side of Mt. Lee during the Summer of 1923.

The sign was originally built with thousands of lightbulbs rigged up across the front of the white letters, 4,000 bulbs to be exact, with the Sections “Holly”, “Wood”, and “Land” set to light up at different intervals during the night. As you might expect, the sign brought quite a bit of attention to Harry Chandler’s real-estate firm and their success led to the HollywoodLand billboard deal continuing on up to the 1940s.

During the falling out of the HollywoodLand real estate company, the sign fell into notably hard times. The H fell down entirely and remained that way for many years, the lights ceased to function, and it looked like it might be the end of an era. Eventually, in 1949, the city took full control of the sign and began a restoration project. The “Land” portion of the sign was removed entirely, and the Hollywood portion was fixed up and ready to shine yet again, but this time as a monument to the beautiful and exciting center of film and bustling city they had built. By this time, The Hollywood Sign had become synonymous with the film industry and the biggest and brightest stars of America.

**Fun fact: The original 1923 Hollywood Sign was believed to have been lost forever until it was put up for auction on eBay by entrepreneur Dan Bliss. Artist Bill Mack made the purchase, using the sheet metal to paint some sweet Hollywood art.

Hugh Hefner Saves The Hollywood Sign: Just Another Day In the 70s 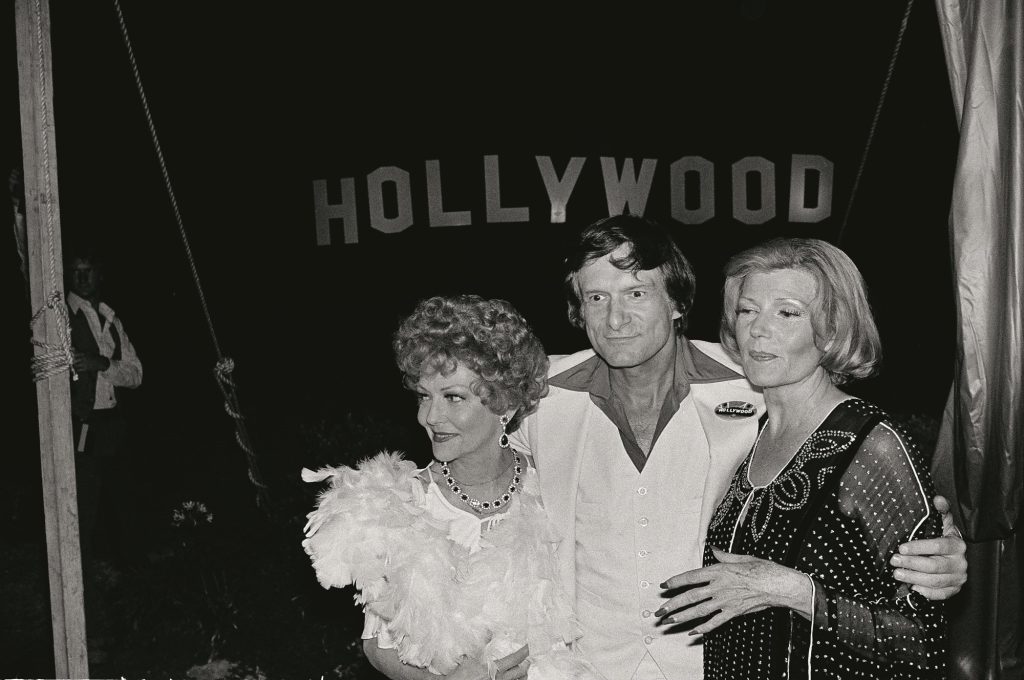 The Hollywood Sign falling into disrepair seems to be a resurfacing theme here in Hollywood. As the years went on teenagers lit a portion of the “L” on fire, one of the “O”s went tumbling down Mount Lee into the valley below. The city of Hollywood was unable to acquire the funding to renew the sign, so it was forced to lean on its celebrity icons that were its inhabitants yet again. Hugh Hefner was at the peak of his popularity in Hollywood, and had connections with just about every major celebrity in the city. Hugh held a Gala event at the Playboy Mansion, inviting celebrities to purchase a letter on the sign with donations of around $28,000 each.

The Hollywood Sign has continued to have its high and low points throughout the years, but it has achieved such a celebrity status of its own that we can comfortably say that whatever is needed to keep the Hollywood sign shining bright on the mountain side, us Angelenos are going to do it. Visit the Hollywood Sign & more on our Perfect Los Angeles tour departing daily from Santa Monica.